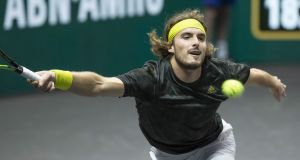 Second seed Tsitsipas, whose bid to reach the final of last month’s grand slam in Melbourne ended with a straight-sets defeat to Daniil Medvedev, saw off Hurkacz 6-4 4-6 7-5 in Rotterdam.

French qualifier Jeremy Chardy secured his passage through to the last eight with a surprise victory over sixth seed David Goffin.

Chardy won both tie-breaks to seal a 7-6 (3) 7-6 (5) victory in one hour and 44 minutes over Goffin, who headed into the Rotterdam tournament fresh from winning his fifth career singles title in Montpellier last weekend.

Chardy (34) takes on Andrey Rublev in the next stage after the Russian’s straight-sets win over Andy Murray.

Meanwhile, Victoria Azarenka is through to the semi-finals of the Qatar Total Open after beating top seed Elina Svitolina in straight sets.

She will face Garbine Muguruza in the semi-final following the former world number one’s triumph against Maria Sakkari.

Muguruza, who is the highest-ranked unseeded player in the field, took five of her 12 break points and hit 14 winners en route to a comfortable 6-3 6-1 win.

In the other half of the draw, fourth seed Petra Kvitova secured a 6-3 3-6 6-2 victory over Anett Kontaveit to reach her third semi-final in Doha.

Kvitova will meet qualifier Jessica Pegula for a place in the final after the American needed less than an hour to defeat second seed Karolina Pliskova 6-3 6-1.