1,500m runner says training setbacks have left her short of her best form 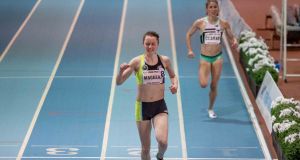 Ciara Mageean will not compete at this weekend’s European Indoor Championships in Poland. Photograph: Morgan Treacy/Inpho

Ciara Mageean has opted out of the Irish team for this weekend’s European Indoor Championships in Torun in Poland, citing a few setbacks in training in recent weeks which has left her short of her best form.

Mageean was part of the original 24-strong Irish team announced last Monday, equally spread between 12 men and 12 women, and would have gone to Torun as one of the medal hopes in the 1,500 metres, having won bronze in Glasgow two years ago.

In truth her form had been slow to come this season, not helped by the sudden death of her former coach Jerry Kiernan in January.

“Unfortunately due to a few setbacks I am not where I want to be in order to compete in the European Indoor Champs and do myself and the Irish vest justice,” said Mageean

“Never an easy decision but one that Steve [Vernon] and myself feel is right in order to best prepare me for the summer ahead.

“I am disappointed not to be racing alongside Ireland’s largest indoor team to date and the amazing athletes who are on top form. Best of luck to all of Team Ireland and my Team New Balance Manchester team-mates too. I will be cheering every step of the way.”

It’s still the largest Irish selection in the history of championships, which began in 1970, and includes another medal winner from the last edition in Glasgow in 2019 in Mark English (800m), who also came away with bronze. He also won silver in Prague in 2015 and outdoor bronze in Zurich in 2014 and travels in excellent form having improved his Irish indoor record to 1:46.10 at the Elite Micro Meet in Abbotstown.

Joining English in that event will be 18-year-old Leaving Cert student Cian McPhillips, who pressed him so hard to the line in that race, and was rewarded with an Irish junior and under-23 record of 1:46.13. There’s a full allocation of three Irish athletes in seven events; the men’s and women’s 60m, men’s and women’s 800m, men’s 1,500m and 3,000m, and the women’s 400m.