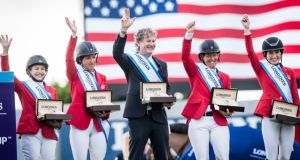 Having shared the lead with Britain at the halfway stage, Ireland, the defending champions, finished a disappointing equal fifth in the opening round of the 2020 Longines FEI Nations’ Cup series at Deeridge Farms in Wellington, Florida on Sunday.

Both teams were on eight faults following two rounds of jumping over a 1.60m track designed by Co Tipperary’s Alan Wade. Madden, who didn’t have to compete in the second round, was the hosts’ representative in the jump-off and, first to go, she went clear with Derry Lou in a time of 33.11 seconds. Thornton also left all the fences intact with Cornetto K but in the slower time of 36.34. Mexico finished third on 17 faults.

Kerry’s Captain Brian Cournane got Ireland off to the perfect start in the opening round with a clear aboard Armik. This was followed by another clear by Limerick’s Paul O’Shea with Imerald Van’t Voorhof before Meath’s Cian O’Connor came home with eight faults (which would be discarded) with Lazzaro Delle Schiave. Offaly’s Darragh Kenny was last to go with Romeo, finishing with four faults which he picked up at the second last fence.

That left Ireland on a first-round total of four faults along with Britain, while three more teams were within a fence of the leaders. The second round saw Cournane and O’Shea both collect eight faults while O’Connor and Kenny added four faults apiece. This saw Ireland slip down the leaderboard on a total of 20.

“We made a few mistakes in the second round and things didn’t go our way but these things happen when you are trying out some new horses who don’t have a lot of Nations’ Cup experience,” explained Horse Sport Ireland’s senior show jumping team manager, Michael Blake.

“It’s a long season ahead and it’s all about building our pool of horses and riders. I want to thank all our owners who made their horses available for us today and we pass on our congratulations to the American team on a fantastic win in front of their home fans. We now look forward to our next Nations’ Cup outing (on Saturday, February 29th) at the Winter Equestrian Festival in Florida.”

Earlier in the day, Tipperary’s Max Wachman (M Quality) and Westmeath’s Franno Derwin (Joli Jumper) picked up four faults apiece in round one to finish fifth and sixth in the Junior 1.40m Grand Prix behind the USA’s Hallie Grimes riding Leasure Z.

Competing at the Palm Beach Masters Series for the first time, Cork’s Billy Twomey was the only Irish rider to progress to the second round of the $213,000 Longines Grand Prix on Friday. Five competitors recorded double clears, Twomey’s time of 38.29 on his own and Kim Barzilay’s Kimba Flamenco only being bettered by the USA’s Mclain Ward riding Noche de Ronda (37.86).

At the same venue on Sunday, British-based Irish pony rider Martha Jobling-Purser scored an international personal best of 71.584 per cent with Valido’s Starlight to finish seventh in the FEI Pony Freestyle class. There the winner was Germany’s Shona Benner on Der Kleine Sunnyboy We (76.375).