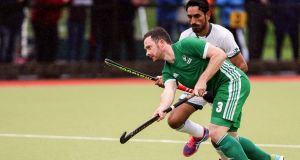 Alexander Cox has rung the changes in the Irish men’s squad for the next stage in the Olympic qualifying process – June’s FIH Series Finals in Le Touquet, France – with six changes from December’s World Cup line-up.

Ireland will be the top ranked side with a top two finish in France assuring them of a ticket to next October’s direct Olympic qualifiers.

John Jackson, 33, is the big name to be recalled after the feisty full-back was not able to make the World Cup and will bring vast experience to the back-line.

He was named in the English conference team of the season for his performances with Bath after a fine season.

Luke Madeley was a reserve in Delhi but forms part of the main panel but this will represent his first international caps in a ranking event.

On the debit side, Olympian Chris Cargo is unavailable for this tournament but has indicated he is keen to continue on with the side later in the year. Mitch Darling has since retired while the vastly experienced Alan Sothern, Kirk Shimmins, Stuart Loughrey and David Fitzgerald miss out on selection this time around.

It means a number of positional changes are likely, particularly given the annotated positions on the Hockey Ireland announcements. Among the eye-catching ones, Shane O’Donoghue looks set to be deployed in defence as he has been used for his Belgian club KHC Dragons this term.

Matthew Bell, usually a left or right-back, is listed in midfield while Sean Murray has been placed in the forwards.

However, coach Cox has hinted there will be plenty of fluidity between the lines, saying: “The selected squad gives me the opportunity to use certain players in multiple lines which I feel is an advantage for us.”

Ahead of Le Touquet, Ireland will meet both the USA and France twice each in warm-up fixtures.