Rovers get their hands on more silverware 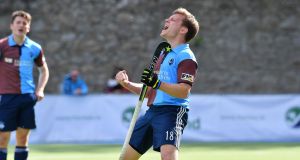 Having won six trophies for a second successive season, the old hands around Grange Road were struggling to recall a run of results quite like it.

Only the run of three Senior Cup wins from 1962 to 64 - the first of which was shared with Lisnagarvey - comes close as the club signed off on another notable season with their 12th victory in the cup.

Jody Hosking got the winner in the 20th minute, the skipper diving on to Luke Madeley’s low push to nick the ball beyond the clutches of James Milliken.

From there, Rovers were stoic in defence and kept Garvey blank for the second time in a week, backing up their 2-0 EY Champions Trophy final victory.

Therein lay the key to a not overly memorable tie. Garvey have scored 133 goals in all competitions this season but they found real openings of note extremely thin on the ground.

Jamie Carr was only tested once, a solid boot to James Lorimer’s drag-flick, while Matthew Nelson and his younger brother Ben were off course with backhand shots from tough angles.

Rovers, meanwhile, carried more menace and might have gone further ahead but for John Mullins hitting the post a minute before the break.

Harry Morris was typically imposing with suggestions around the ground that he would be ripe for some sort of Irish trial.

The second half proved a fiery, if not wholly edifying, affair with turnovers abounding and a few fractious exchanges.

Nonetheless, they will reflect on a strong campaign, winning the EY Hockey League regular season, blooding a host of new faces after the departure of a wealth of senior internationals.

For Rovers, that might be a template they have to follow next season. Madeley, Carr and Daragh Walsh are all set for European moves in the summer while coach Niall Denham is also stepping down.

The coach feels the time is right to move on, saying the squad will benefit from a new voice in the form of Gareth Borland who takes on the reins.

Denham took on the role a month before the 2015-16 season, stepping up from his post as a youth team coach in something of a crisis with players leaving left, right and centre.

He steadied the ship in year one with a mid-table finish before going on to win the Champions Trophy three times in a row as well as two Irish Senior Cups, two Neville Cups and two Mills Cups while also notching the biggest win by an Irish club in the Euro Hockey League - 6-0 against Racing Club de France.

With new faces on board next term, the challenge will be can they continue these halcyon days at Grange Road.