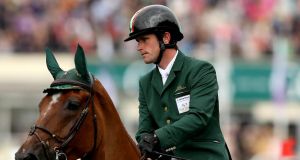 Darragh Kenny’s rewarding visit to the Kentucky spring horse show in Lexington concluded on Sunday with victory in the Commonwealth Grand Prix on Scarlett du Sart Z but was highlighted by his second successive win in Saturday’s Kentucky Grand Prix with Jack Snyder’s Babalou 41.

Seven of the 49 starters progressed to Saturday’s jumo-off where Co Offaly-born Kenny, in 47.84, was nearly a second faster than the early pacesetter, the USA’s Margie Engle on Royce (48.90). Last to go, Ali Wolff of the USA tried to beat Kenny’s time but had to settle for second when stopping the clock on 48.26 with Casall.

The result completes a brilliant comeback for Babalou 41, 14-year-old Oldenburg mare by Balou du Rouet, which missed out on a place at last September’s World Equestrian Game having undergone emergency colic surgery.

“After her win in last year’s Grand Prix, she was amazing through the summer but unfortunately she had colic surgery and we spent the whole winter working to get her back to her best again,” said Kenny. “ She finally feels like she’s there. It’s nice to have her back to her old self again. Next she will jump two weeks in Spruce Meadows in both Grand Prix classes and then I will aim her for the Grand Prix in Aachen (Germany) again.”

There were also seven clears from 44 starters over Sunday’s first round track, Kenny going through with two horses. He was first to go in the jump-off with Vlock Show Stables’ nine-year-old Zangerscheide mare Scarlett du Sart Z and jumped a double clear in the unbeatable time of 37.082. Mexico’s Eugenio Garza Perez finished second on Pappa Ante Portas (39.084) while Kenny recorded the only other double clear to place third on Sweet Tricia (40.099).

With Ann Thompson’s Balou du Reventon, the US-based Kenny is one of five riders named by Irish show jumping team manager, Rodrigo Pessoa, for next Friday’s opening leg of the 2019 Longines FEI nations’ cup (Europe, Division One) series which takes place at La Baule in France.

Back to last weekend and in Europe, Tipperary native Shane Breen, the only Irish rider among 26 starters, won Sunday’s five-star 1.50m speed class at the Royal Windsor Show in England on Team Z7’s 13-year-old Canturo gelding Can Ya Makan. In the two-star 1.45m Grand Prix at Opglabbeek in Belgium, there was a fifth-place finish for Kilkenny’s Ger O’Neill on Home Farm Equestrian’s 11-year-old stallion Uncas S.

In the earlier seven-year-old final of the second leg of the Irish Sport Horse Studbook show jumping series, the honours went to the Cardento gelding BBS McGregor which was ridden by Jack Ryan for his mother, Marguerite, who also bred the grey.

In eventing, Sunday’s two jumping phases of the first leg of the 2019 Event Rider Masters series at Chatsworth House in England saw major changes to the dressage results. In the end, between withdrawals and eliminations, just 19 of the 30 starters completed with the win going to Britain’s Laura Collett who finished with a three-phase penalty total of 34.5 on London 52 on which she led after dressage.

Collett posted one of just seven clear show jumping rounds as did Co Kildare-based Cathal Daniels who finished best of the three Irish when climbing from 28th after dressage to place sixth on Margaret Kinsella’s home-bred mare, Rioghan Rua (47). England-based, Co Down native Susie Berry, who had one show jump down, finished eighth overall with Devenish Nutrition’s Stonedge (49.2).

It was very much a day of mixed fortune for Carlow’s Sam Watson who, through others having show jumping faults, had climbed to second when clear in the second phase with David Bogossian’s Tullabeg Flamenco only to drop right down to 18th (68.6) when the dun gelding glanced off the first element of fence 20.

In one of the other CCI4*-S sections at the Derbyshire venue, Co Meath’s Sarah Ennis partnered Brenda Kennedy’s 10-year-old Garrison Royal gelding into third place (44.2 penalties) behind Japan’s Kazuma Tomoto on the Irish Sport Horse gelding Brookpark Vikenti (33.3), an 11-year-old by Master Imp, and Britain’s Sam Ecroyd on Wodan III (43.8).

The next round of the Event Rider Masters takes place in Wiesbaden , Germany in early June with the series visiting Ireland for the first time in August when leg five will be staged at Millstreet.

At the international horse trials in Marbach, Germany, where the testing going on undulating terrain caused a lot of problems on the cross-country phase, the Co Laois sister and brother duo of Jennifer and Brian Kuehnle finished fifth and sixth in the CCIJ2*-L with Polly Blue Eyes (39.60) and Tullibards Now Or Never (52.40) respectively. The 33-strong class was won by Germany’s Calvin Bockmann riding Altair de la Cense (31.20).