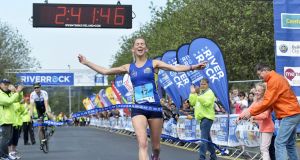 There are lots of good ways to fine-tune your marathon preparations, and running a marathon is not normally considered one of them. For Laura Graham, it’s about the only way she does know.

Last year, Graham emerged from the proverbial nowhere to run 2:41:54 and win the national marathon title which comes with being the first Irish finisher in the Dublin marathon. She’ll now defend that title in Sunday’s race, just five weeks after running a new personal best of 2:37:05 in Berlin.

Such marathon scheduling may not work for everyone, yet worked just fine for Graham earlier this year when, eight days after running the London Marathon in 2:42:38, she won the Belfast marathon in 2:41:45, the first outright Irish women’s winner since 1999. She put together a similar schedule in 2016.

What makes her achievements all the more remarkable is that at age 31, Graham is also the mother of four young children, Payten (seven), Jaydon (six), Layla (five) and Darcy (three), who she parents along with her husband Thomas. She also works part-time at the local leisure centre at Kilkeel, in south Co Down.

She also started running “by complete accident”, running the Belfast marathon seven years ago to help raise funds for a heart charity after her father Drew survived a heart attack. She then took a break to have her children, before starting back in 2014. Now coached by Ryan Maxwell of Mourne Runners AC, she starts Sunday race as favourite to win back that Irish women’s title.

“I love this race,” she says. “There is a great atmosphere, with families and their children supporting you along the route. When I’m racing I can’t wait to get to the line and meet my family – that’s something I am really looking forward to in Dublin.”

Graham admits to doing most of her training on a treadmill, often while watching her children sleep. She won’t have it all her own way on Sunday, however; Barbara Sanchez, Maria McCambridge and Caitriona Jennings are also eying up that Irish women’s title.

Sunday’s race – all 20,000 entries for which sold out last July – is another record field, with Sergiu Ciobanu of Clonliffe also back to defend his Irish men’s title. Outright race favourite is Ethiopia’s Asefa Bekele, third last year, and second in 2015, running 2:15:01 and 2:14:21 respectively.

For the first time, the organisers are also providing a live stream on the marathon YouTube page, SSE Airtricity Dublin Marathon. Now the fifth largest marathon in Europe, it’s estimated to be worth €21.6 million to the city.

Ireland women to complete Euro qualifiers later this year 15:09
European clubs must take lessons from financial demise of former greats 13:51
Premier League clubs vote to resume contact training 13:02
People who attended illegal match in France are asked to get tested 12:09
Record numbers of adults in Ireland participating in sport and walking 11:45
Here is your handy guide to sport on television this week