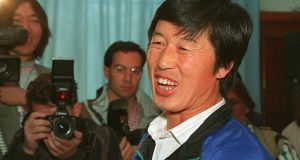 In an interview with German broadcaster ARD Sportschau, former Chinese team doctor Xue Yinxian has claimed all medals won by the Chinese athletes in the 1980s and 1990s should be handed back, such was the systematic level of doping within the country at the time.

ARD previously helped reveal the systematic doping in Russia which resulted in their athletes being banned from the 2016 Rio Olympics, and Xue’s revelations appear equally damaging.

The 79-year-old, who last month arrived in Germany seeking political asylum, said all Chinese medals were “showered in doping” and in fact extended beyond national teams. “In the 1980s and 90s, Chinese athletes on the national teams made extensive use of doping substances,” she says. “Gold, silver and bronze. All international medals should be withdrawn.”

O’Sullivan was twice denied gold at the 1993 World Championships in Stuttgart: she was run out of the medals by three Chinese women in the 3,000m, finishing fourth, before winning silver over 1,500m, again behind another Chinese athlete.

All those runners trained under Ma Junren – better known as “Ma’s Army” – and although never caught for doping, Chinese state media also reported last year that all nine of Ma’s Army were forced to take “large doses of illegal drugs over the years”.

According to one of the most prominent of those runners, Wang Junxia, who also won gold over 5,000m at the 1996 Olympics in Atlanta (where O’Sullivan was forced to drop out), she once detailed the regime of state-sponsored doping in a letter, penned in 1995, which remained unpublished for 19 years. Ma did claim to feed his athletes several strange concoctions, including turtle soup.

Now according to Xue, for those two decades the success of the country’s top athletes was founded on fraud. She first made a similar statement in 2012, after which she claims she never felt safe in her home city of Beijing, and was harassed by the government.

Starting in the 1970s, she was one of the physicians looking after several national teams in her home country: “It must have been more than 10,000 people. They believed only in doping. Taking doping substances means defending your country, they said. If you were against doping, you were a danger to the country. And anyone who endangered the country is now in prison.”

She also claims doping controls in China at that time had only one purpose: to make sure athletes could travel to competitions without being caught. If the drugs were no longer in their bodies, they communicated this with a code: “Grandma is home.”

Xue also added that she was against doping, and that this cost her job as chief physician to the national teams. She was asked to treat a top athlete with doping substances ahead of the 1988 Seoul Olympic Games.

“If anyone refused doping, they were thrown out of the team. The children’s teams were the first to be given the drugs. The youngest were only 11 years old. I couldn’t do anything about it. They only approached me once there were problems. One trainer came to me and said: Dr Xue, the boys’ breasts keep getting bigger. These boys were about 13 to 14 years old. I asked: how did this happen? And he said: it’s because of the substances that Chen Zhanghao gave them.”

Chen Zhanghao was the chief physician to the Chinese national teams. As early as 2012 he admitted that doping took place in China.

ARD reporters tried to contact the Chinese Olympic Committee and China’s ministry of sports for a response to the claims, but received no reply, according to the broadcaster.