America at Large: Maroney casts new light on sexual abuse in US gymnastics 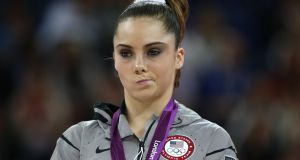 At the 2012 Olympics in London, American gymnast McKayla Maroney was hotly favoured to take individual gold in the vault until a misjudged landing consigned her to silver. On the podium following the presentation of medals, cameras captured the 16-year-old wearing a rueful expression, equal parts disdain, disgust and disaffection.

The photograph immediately went viral and somebody dubbed it the “not impressed” face. When the victorious women’s team went to visit the White House a few weeks later, Maroney and President Barack Obama reprised the now infamous sneer for a picture in the Oval Office. Her pop cultural moment.

Hours before fluffing her lines so spectacularly at those games, Maroney was sexually assaulted by Larry Nassar, the USA team doctor in the position for nearly three decades. He had been molesting her since she was 13-years-old and a newly-arrived neophyte at Bela Karolyi’s national training camp in Texas, the ultimate destination for every ambitious gymnast in this country.

The attacks always took place under the guise of providing medical treatment, every injury offering him his chance. As one of the highest-profile names in gymnastics, Maroney’s decision to go public last week generated headlines and has again shone a necessary spotlight into a very, very dark corner of the sporting world.

“Silence has given the wrong people power for too long,” she wrote in a statement inspired by the #metoo campaign on social media. “And it’s time to take our power back.”

Nassar has pled guilty to child pornography offences but is awaiting trial on numerous other charges of offences against dozens of female gymnasts, not including Maroney. However, the case against him is about much more than just one predator using his position and privilege to gain access to girls. There are wider implications for an already beleagured sport. In a civil lawsuit filed last year, it’s alleged that Bela and Martha Karolyi, the most famous coaching tandem in the history of gymnastics, producers of nine Olympic champions, were complicit in what happened to so many children under their tutelage.

The contention is that the Karolyis ran such an oppressive regime, including physical, mental and emotional abuse designed to toughen girls up, that the kids were degraded, humiliated and made especially vulnerable when somebody like Nassar came around proffering chocolate and other contraband to get in their good graces. Lawyers for Jane Doe, a former national team gymnast who wishes to remain anonymous, have alleged that the Romanian couple and the USA Gymanstic authorities must have known what happened at their ranch and turned “a blind-eye” to the doctor’s proclivities.

While the Karolyis, USA Gymnastics, and Michigan State University, another of his employers, deny those charges, here is a sport that appears to have allowed child abusers to flourish for decades because of an historic culture of neglecting to act on damaging information received. In recent years, the stellar investigative reporting of the Indianapolis Star unearthed more than 50 instances where the most powerful administrators in gymnastics failed to alert police when lurid accusations were made against coaches, thereby enabling those under suspicion to move from state to state finding new positions at different clubs.

Bill McCabe didn’t have his coaching certification revoked by USA Gymnastics until nearly a decade after they’d first received a dossier of complaints about him. He’s now serving 30 years in prison for sexual exploitation of minors. Similarly, the governing body had a thick file of allegations about Mark Schiefelbein that it sat on. For crimes including aggravated sexual battery and child rape, he was eventually sentenced to 36 years. As those cases and others indicate, an institutional unwillingness by those in charge to confront the problem meant hundreds of more girls were doomed to suffer.

Earlier this year, USA Gymnastics published its own independent investigation conducted by a former federal prosecutor and issued new guidelines about compulsory reporting of all future allegations to law enforcement. A welcome if belated step. However, many of those who lived through the Nassar years were surprised that nobody involved thought to interview them about how the doctor manipulated his position of power to abuse them with such impunity.

There is a lot of residual anger too at the fact Steve Penny, CEO of the organisation at a time when files about child abusers were, literally, kept in a drawer, was given a $1m severance package to leave his position a few months back. Some of those whose lives were ruined on his watch would have preferred that money to go to some sort of therapy programme to assist the victims.

“For me, the scariest night of my life happened when I was 15-years-old,” wrote Maroney. “I had flown all day and night with the team to get to Tokyo. He’d given me a sleeping pill for the flight, and the next I know, I was all alone with him in his hotel room getting a ‘treatment’. I thought I was going to die that night.”

At last count, 119 victims have come forward with vivid and detailed accounts of how Nassar digitally penetrated them when they were children under his care. Yet, in the aftermath of Maroney’s revelations, lawyers for the physician have filed motions seeking a change of venue and a delay for his upcoming trial in Michigan due to what they argue is “inflammatory and sustained” media coverage. Not impressed face? Me too.