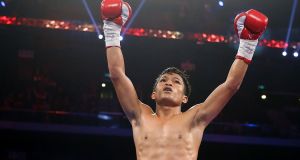 Jerwin Ancajas of the Philippines celebrates a knockout win against Fadhili Majiha of Tanzania during their bantamweight fight at The Venetian in Macau in 2015. Ancajas will fight Jamie Conlan in Belfast next month. Photo: Chris Hyde/Getty Images

When they rode the ribbon highways of the American Midwest, shoehorned into Sean Gibbons’ white Honda Civic hatchback, they called themselves the Knucklehead boxing club. Fighters for hire. No opponent too big. No venue too small. Sometimes they climbed through the ropes to take on each other. Often, they didn’t even know what name they were fighting under until it was announced over the PA. Minor details. It only mattered that at the finish they’d have cash money pressed into their hands for their night’s work. Fifty bucks a round in some places. Twice that in others. A kind of living.

Aside from being designated driver, cornerman, trainer, and manager of Verdell Smith and Buck Smith (no relations) – the club’s most celebrated alumni – Gibbons also stepped into the breach if a gap appeared on the undercard, occasionally as his alter ego Adrian Crawford, other evenings as himself, the name he used when battling Mickey Rourke to a draw in the actor’s last pro outing. He had learned the fight game from his uncle Pat O’Grady in Oklahoma, an unscrupulous, hardscrabble Irish-American promoter whose son Sean was briefly WBA lightweight champion of the world in the 1980s.

By the mid-90s, Gibbons was known as Buddy Holly for his looks and as “The Oklahoma Meat Packer” for his ability to somehow unearth game barnstormers at very short notice who might not quite go the distance. Verdell Smith was a welterweight who finished with an official tally of 46 wins, 62 defeats and three draws. Under his own name. There is no accurate account of how he many he won or lost as Tim Brooks and Tommy Bowles, his preferred aliases for Knucklehead bouts in Indiana and Missouri, or as Terry Williams, another pseudonym.

Buck Smith’s record of 181-20-2 seems more respectable but at least eight of his victories came against some version of his travelling companion, Verdell, each of those triumphs earning him the front seat for the long drives home. He also accompanied Gibbons on unofficial and unrecorded sorties into Mexico and Canada, once reeled off 12 fights in a calendar month, and has the unique boast of having fought twice in the same night in two different states. Without even changing his shorts.

“Outside of boxing, people will call it fight fixing, but inside of boxing this is the art of matchmaking,’’ said Gibbons when the authorities investigating his more questionable work practices. ‘’That’s not criminal. That’s making a living.”

Twenty-five years after circumventing a medical suspension in Missouri by sending a black heavyweight named Mike Smith into the ring under the license of Shane Mooney – a white welterweight who’d died in a car accident five months earlier – Gibbons arrives in Belfast later this month. He’s the charismatic matchmaker behind Filipino sensation Jerwin “Pretty Boy” Ancajas putting his IBF Super Flyweight title on the line against Jamie Conlan at the SSE Odyssey Arena on November 18th.

A headline bout a long way from the bad old days when boxing magazines refused to print the results of Knucklehead promotions because they couldn’t verify who’d actually been in the ring, Gibbons’ career represents the best and the worst of the sport. Romantics spin yarns about the 300,000 miles he put on his Honda keeping the pro game on life support in boondocks from Kentucky to Montana, hiding money in jock straps, napping in lay-bys between bouts, the occasional bending of rules and blurring of identities merely adding a rogueish tint to every tall tale.

But there’s more to the story than tough men willing to bleed and lose for a few bucks. There was danger too. Concussion protocols were traditionally ignored and boxers routinely fought out of their weight classes. In 2003, long after he had left behind the Palookavilles of the Rust Belt for the ersatz glamour of Las Vegas, Gibbons lined Brad Rone up to fight Billy Zumbrum in Utah at three weeks’ notice. Tipping the scales at 259, Rone had lost his previous 25 bouts, was banned from fighting in Nevada but apparently needed the $800 for his mother’s funeral. He died of a heart attack at the end of the first round.

It was around then Gibbons became enmeshed in an elaborate FBI sting called “Operation Match Book”, the script of his life pivoting from “Million Dollar Baby” to “Donnie Brasco”. An undercover NYPD cop named Frankie Manzione infiltrated his camp as part of a government campaign to clean up the sport, and the ensuing fall-out from a raid by the Feds cost him a gig as matchmaker for Bob Arum at Top Rank. He recovered from this setback and others of a similar stripe because, even his critics admit, he is an incredible judge of talent and retains an uncanny eye for the main chance.

“This sport has become so bureaucratic and over-regulated by these stupid commissions,” said Gibbons earlier this year. “Seriously, these guys who have never, ever been hit in their life by anything resembling a boxing glove making up rules left and right, and always for the health and safety of the fighters… This is such a great sport but I’d give anything for it to be 20 years ago.”

On his Linkedin profile, Gibbons’ current occupation is listed as Head Knucklehead.