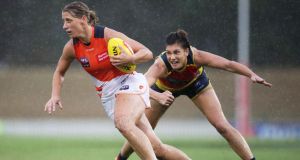 It was back in 2004 that The Irish Times Sportswoman of the Year awards started up and looking back at that first list of monthly winners only one of the 12 women is still active in competitive sport, the other 11 all having since retired. The woman in question has been a frequent monthly winner through the years, but this time around she has a new sport in brackets after her name, Cora Staunton having, literally, taken on a whole new ball game.

It was in December that she set off for Australia to join up with the Greater Western Sydney Giants having become the first international player to be drafted by a club in the women’s Australian Football League. The beginning of her adventure was, of course, delayed because she was busy captaining Carnacon to victory in the All-Ireland club final, but with that winner’s medal safely collected her Aussie Rules adventure began.

After her performance in her opening game for the Giants, a practice match against Brisbane Lions, the club tweeted the Ladies Gaelic Football Association:

“Dear @LadiesFootball, Thank you so much for [Cora], she’s a star. Can we keep her? Regards, Australian Football.”

An immediate impact, then, Australia getting to learn what we had already known for over two decades: Cora Staunton is quite useful at sport.

Dear @LadiesFootball,
Thank you so much for @duckie15, she’s a star. Can we keep her?
Regards,
Australian Football.

She’s kicked two for the game and her last - a snap over the shoulder - was class. #NeverSurrender

But whatever about her own form for her new employers, the prospect of the Giants being in contention for a place in the Grand Final looked slim enough after they had finished bottom of the table in the AFL’s inaugural season in 2017, winning just one of their seven games. And when they opened the new season with another defeat, that prospect looked even slimmer.

The Giants’ performance that day, though, and the promise shown by Staunton on her competitive debut, gave cause for optimism, the team having led Melbourne, for whom former Cavan footballer Laura Duryea was playing, until the final quarter, losing 45-39 in the end.

Since then? They’ve won three and drawn one of their four games, their shock 18-point victory over League leaders Western Bulldogs last weekend lifting them to third in the table and giving them a chance of reaching the Grand Final on March 24th.

It all comes down to Friday’s game against Brisbane Lions in Sydney – with five teams still in contention for a place in the decider, the permutations are complicated enough, but if the Giants win then there’s a good chance Staunton will be playing in that Grand Final.

To get an idea of what she has contributed to the effort so far, it is Staunton who adorns the promotional poster for the Brisbane game. “This footy thing isn’t too hard, is it,” she was asked in her post-match interview. “Every day at training is a school day for me,” she said, “every match is an exam – and a hard exam.”

Her school report would say “a quick learner”, though, despite the difficulties of adapting to, as she puts it, “the funny-shaped ball”. “I try to learn something from each game and bring it in to the next. I sit down with Al [Giants’ coach Alan McConnell] at the start of each week and ask him what I need to improve on. All I want to do is work as best I can for the team. It’s a lot different role to the one I have at home, I have to change my mind-set. I’m a scorer at a home, and a high scorer, over here my role is different, whether it’s to lay a tackle, put pressure on, set up a score, or get a score, whatever they want to me to do I’ll do.”

Having only started playing the game in December, Staunton’s progress has left the pundits amazed, not least former Aussie Rules star Paul Hasleby who spoke to Fox Sports about the Mayo woman.

“I think there’s going to be a few recruiters who go back to Ireland to try and find some more players like Staunton. Against Fremantle, just about every goal came through her. She competed hard in the air and is going to be a player of the future if she continues to learn her craft. She brings her team-mates into it and has a great awareness of where the ball needs to go. She was magnificent.”

That she is being spoken about as “a player of the future” at the age of 36 says it all about her impact. Mind you, if she gets to that Grand Final Mayo will hope her appetite for Aussie Rules will have been sated and she’ll return to the green and red.

December: Fiona McHale (Gaelic football). McHale was the driving force behind Carnacon’s victory over Mourneabbey in the All Ireland club final, the Mayo midfielder earning the Player of the Match award for her performance in a 0-15 to 1-10 win at Parnell Park.

January: Phil Healy (Athletics). The Cork woman had a hugely encouraging start to the indoor season when she knocked over a second off her 400 metres personal best by running 52.08 at a meeting in Vienna in what was her first race of the year. Her performance earned her European Athletics’ Female Athlete of the Month award.