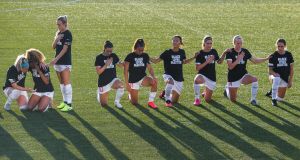 Rachel Hill stands while her Chicago Red Stars team-mates take a knee during the US national anthem before a game in the NWSL Challenge Cup in Herriman, Utah. Photograph: Alex Goodlett/Getty Images

You know yourself, you set out to Google a specific thing but you end up hitting so many diversionary links that three-ish hours later you forget what you were looking for in the first place. And a chunk of the day is gone.

The latest example was a search for some background on Chicago Red Stars’ Rachel Hill and North Carolina Courage’s Samantha Leshnak-Murphy which veered so far off course it led to multiple pieces on a 1950s Woody Guthrie song dedicated to his landlord in Brooklyn.

What was that Talking Heads’ line? “You may ask yourself, well, how did I get here?”

Not that Hill, Leshnak-Murphy and Guthrie are entirely unconnected, although the link is, admittedly, tenuous.

The two footballers are among those who’ve been on the receiving end of plenty of attention since they decided not to “take the knee” during the playing of the national anthem before their clubs’ National Women’s Soccer League games the past fortnight. They stood out, literally, because all of their team-mates knelt during The Star-Spangled Banner.

It’s been quite a trip over the last four years. Colin Kaepernick, the former San Francisco 49ers quarterback, was the talk of America back in the summer of 2016 when he first started taking the knee – now the bulk of the focus is on the sportspeople who don’t.

Initially, Hill and Leshnak-Murphy became the darlings of those opposed to the Black Lives Matter movement, while getting a fair old heap of venom from sections of its support. One tweetin’ charmer, for example, created a “Bitches Who Stood” list, to which their names were added along with all other players who’d refused to take the knee.

But the love the frothy-mouthed anti-BLM wing had for the women soon dissipated when they explained their stance, which contained a little too much nuance for their liking.

Both women come from military families, which is why, they explained, they could not, in conscience, “disrespect” the anthem

Hill, who had stood with a supportive hand on the shoulder of her kneeling and weeping team-mate Casey Short, said: “I support the Black Lives Matter movement wholeheartedly. I also support and will do my part in fighting against the current inequality. As a white athlete, it is way past due for me to be diligently anti-racist.”

Murphy, meanwhile, had worn a BLM T-shirt during the warm-up for the game, a photo that didn’t do the rounds, and then knelt with her team-mates in honour of George Floyd, the man killed by police officers in Minneapolis back in May, and all victims of racial injustice.

Both women, though, come from military families, which is why, they explained, they could not, in conscience, “disrespect” the anthem.

It was three years ago that Hope Solo, the United States’ World Cup-winning goalkeeper, spoke to this here paper, and, confession, when the subject of “taking the knee” came up, there was an assumption that she, being of the rebellious, authority-defying kind, would be all for it. Not so.

“It’s difficult because people have different reasons for why they do or don’t take a knee to the anthem, but for me what is most important is respect for people’s decisions.”

“But I would never take a knee to the national anthem because I come from a military family. In the same breath, I recognise the social injustices against black Americans.”

Solo is probably, then, already on the “Bitches Who Stood” list, when, no more than Hill and Leshnak-Murphy, she might be better viewed as a useful ally, one who balances her own anthem-saluting loyalties with support for the BLM movement, and doesn’t view them as incompatible.

Which is probably how Pulpit and Pen would see them, this being one of interweb places we ended up being diverted to on this latest Googly trip.

After doffing their cap to the footballers who refuse to kneel, they then somewhat breathlessly reported that “Activists Demand Replacement of National Anthem with Marxist Song”.

The source of their ire was news that Tulsa Athletic, a semi-professional football team in Oklahoma, had announced “that they would replace the National Anthem with a song written by a Marxist in order to create an inclusive community.” All that was missing was an exclamation mark.

The song in question is Woody Guthrie’s This Land Is Your Land, “a song interpreted by many as having Marxist undertones”.

There he was, in 1950, complaining about his landlord, accusing him of being racist because he didn’t allow black people rent homes in the block where Guthrie was living.

“I suppose
Old Man Trump knows
Just how much
Racial Hate
He stirred up
In the bloodpot of human hearts
When he drawed
That color line
Here at his Beach Haven family project.”

Fred Trump, that is, the Donald’s Da.

That could well be an anthem to which even Hill and Leshnak-Murphy would take a knee.

1 New team, fresh start, has Dan Martin shooting for the stages
2 Gerry Thornley: Irish system to face its acid test in front-loaded return
3 Niall Quinn and Brian Kerr differ on role of outsiders in FAI
4 Fathers, sons and soccer: Reflections on the family business
5 James Ryan injury could open the door for Ryan Baird
Real news has value SUBSCRIBE
Here is your handy guide to sport on television this week