Kane on the double for Spurs as Mourino ends Tyneside drought 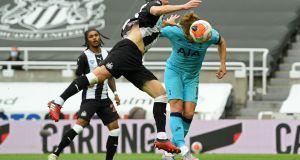 José Mourinho finally supervised his first Premier League win on Tyneside as Newcastle United’s agonisingly long wait to learn whether they are to be taken over by a Saudi Arabian-led consortium prompted further complaints from Steve Bruce.

Before kick-off Newcastle’s manager reiterated that it was time for the Premier League to make their minds up about the £300 million buy-out and, as well as his side played in patches, the resultant uncertainty arguably contributed to their third straight defeat on a night when a goal from Son Heung-min and two more from Harry Kane ensured Tottenham’s Europa League ambitions continue to flicker.

Bruce reverted to 3-4-3 and was rewarded with a bright start. No one epitomised Newcastle’s initial omnipotence more than Allan Saint-Maximin with the French winger contributing one gorgeous, dizziness-inducing, dummy which left Harry Winks bamboozled.

When Matt Ritchie, restored to left wing back, curled in a fabulous right-footed cross Jonjo Shelvey should probably have scored. Instead, the playmaker, arriving late in the box headed over from 10 yards.

Within a few minutes it looked an even worse miss as Son gave Spurs the lead. Until the first drinks break Mourinho’s side had barely threatened but something he said during that interval clearly registered as, almost immediately, Lucas Moura forced Fabian Schär into losing possession following the defender’s heavy touch.

It set in motion a chain of events which saw Moura, Harry Kane and a stretching Giovanni Lo Celso cue up Son. Although DeAndre Yedlin blocked his path, Son simply shifted the ball onto his right foot and shot low though the right wing back’s legs, evading Martin Dubravka at his near post.

Bruce was left to reflect on the decline in Schär’s once assured game over the past season before, not for the first time, looking relieved to have Dubravka in goal. When Son’s 25-yard shot took a deflection off Emil Krafth the ball’s trajectory swerved, capriciously towards the top corner but the Slovakian proved equal to the challenge, somehow tipping the ball to safety.

Once again Newcastle looked to Saint-Maximin to raise the tone and he did not disappoint, provoking sufficient uncertainty in the visiting defence to permit Shelvey to whip in a splendid cross headed against a post by Dwight Gayle.

That Schär error apart, Bruce’s under-strength, injury-hit side were playing well with Shelvey in imperious midfield mood and the Tottenham goalkeeper, Hugo Lloris, required to remain on his toes.

Ritchie was having a good game and deserved his equaliser that was created by a combination of substitute Valentino Lazaro’s fine dribble and Serge Aurier’s panicked clearance. That ungainly slice on the part of a right back playing only two days after his brother Christopher was shot dead outside a Toulouse nightclub saw the ball fall to Ritchie who took a stabilising touch before extending his left foot and lashing it into the top corner.

Kane had seemed a little quiet but, yet again, was in the right place at the right time to head substitute Steven Bergwijn’s curving cross beyond Dubravka. It was the 200th club goal of Kane’s career and emphasised that Krafth, normally a right back, is not a central defender.

Mourinho’s maiden victory on Tyneside was sealed by another Kane header after Dubravka’s parry of Erik Lamela’s counterattacking shot. – Guardian