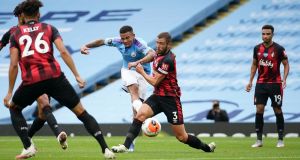 A week beginning with the Court of Arbitration for Sport appeal victory moved to this hard-fought win for Pep Guardiola’s side that keeps them honest before the continuation of their FA Cup defence against Arsenal.

Despite a late rally, Bournemouth remain third-bottom on 31 points with only two games left – one less than the other teams embroiled in the relegation dog-fight.

With an eye on Saturday’s FA Cup semi-final, Guardiola’s changes totalled six, with Kevin De Bruyne and top-scorer Raheem Sterling the notable exclusions. Eddie Howe made four changes and decided on a 4-5-1 that had Dominic Solanke at the tip.

City flooded forward from kick-off in a move that ended with Kyle Walker’s cross going out. Guardiola stated his players just like to play and after Dan Gosling’s header was collected by Ederson the goalkeeper hit a raking clearance straight into Gabriel Jesus and Bournemouth were turned. His pass into David Silva lacked accuracy, but the veteran playmaker’s next contribution was full of the quality. After Jefferson Lerma upended Silva he placed the ball for the free-kick and fashioned a peach of a strike that hit the left corner of Aaron Ramsdale’s goal, in off the woodwork.

City were 11-0 up on aggregate in their last two league outings plus six minutes of the third. The score came close to being added to when Fernandinho’s 20-yard shot left Ramsdale stranded before going just wide.

Howe had said that “nothing is impossible” and in a Solanke blocked effort and a period where his team hemmed City in around the centre circle there was intent. Diego Rico was next to show: his ball from the left towards Solanke had Benjamin Mendy scrambling to clear.

The Cherries strategy was similar to that which rattled Manchester United recently: pace and pressing being deployed to stifle City. Junior Stanislas had opened the scoring at Old Trafford. Here he hit a free-kick at Ederson that the Brazilian flung himself at and palmed on to the left post. The ball rebounded back on to his head and out for a corner.

City were now in a contest. This made Bernardo Silva’s scuffed attempt in front of goal rate even more wasteful. And when Solanke turned at close range and shot only Nicolás Otamendi’s thigh prevented an equaliser.

But, now, came a superb City second. Ilkay Gündogan fed David Silva who slid in Jesus. The No 9 nutmegged Jack Stacey, left Steve Cook in a different postcode, and smashed the ball home.

City were now in cruise control. Lee Mason turned down a penalty appeal, the referee adjudging Jesus was not fouled but Bournemouth had an Everest to climb as the second half kicked off.

The introduction of Sterling for Bernardo Silva would hardly have cheered Howe’s men, as Eric García also replaced Walker. The reshuffle had Jesus going left, the quiet Phil Foden right, and Sterling operating at centre forward.

Bournemouth were profligate from a corner, Rico hitting an aimless ball when his delivery came back to him. Foden’s touch from a sweeping Mendy cross was as clumsy, the youngster normally so technically adept. Jesus was more accomplished when John Stones floated a lovely 60-yard ball into his run: the striker took it as he ran but was unable to trouble Ramsdale.

When Stanislas found Joshua King he finished but VAR ruled the latter was offside: it was marginal. Bournemouth were encouraged, again taking the match to City, disrupting their passing rhythm. Their best move came when Solanke passed to Stanislas whose cross was aimed at the former. Ederson pushed it out to Gosling and his effort was deflected to safety by Gündogan.

The sense was Guardiola’s side were not yet home. They came close to being so when David Silva found Jesus, and he went down: VAR ruled no penalty. David Brooks gave City a late scare when he scored from Callum Wilson’s ball with a minute left and after Mason awarded six extra ones, Ederson made a brave double save from Sam Surridge and Callum Wilson. – Guardian