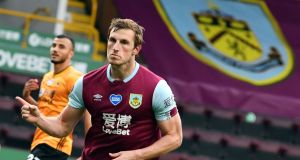 In terms of expected temperature this was as tepid an encounter as an unseasonally chilly Lancashire evening, though at least it was enlivened by a superbly taken goal and a little late VAR drama.

A sumptuous right-foot volley saw Raúl Jiménez become the first Wolves player since John Richards in 1975-76 to manage 17 goals in a top-flight season, before Chris Wood redeemed a horrendous injury-time miss with the last-minute penalty that earned his side a point.

Nick Pope has often come to his side’s rescue this season but he had no chance when a rebound from a defender sat up perfectly for Jiménez to strike. With the ball in the air when a Matt Doherty cross was blocked it was still a difficult chance, but the Mexican got his timing and his angles exactly right, putting power into the shot and finding the corner the goalkeeper could not reach.

It looked a worthy winner, but Burnley never give up, and in the five minutes of added-time Wood missed a open goal with a header from three yards out before getting lucky when his attempted overhead kick distracted Doherty sufficiently to let the ball strike his arm. Mike Dean had little hesitation in pointing to the spot, and VAR backed him up, one view in particular showing Doherty’s arm outstretched for no apparent reason.

Wolves spent the first period showing why they are sixth in the table, with Conor Coady spraying 60-yard passes from the back and finding willing runners in Adama Traoré and Ruben Vinagre.

Jiménez brought the first save of the game with a far-post header from a Traoré cross, and with Daniel Podence beating Erik Pieters with a handsome turn on the opposite flank it was clear before the first drinks break that Burnley were in for a thorough defensive examination.

Charlie Taylor was being given a torrid time by Traoré on the Burnley left, though the full back was attempting to set up an attack when he twisted a knee after half an hour. Though Sean Dyche has been struggling with injuries and departed players he actually had a ready-made solution to this problem – switching Pieters from the right wing to his more usual spot at left back and allowing Johann Gudmundsson to come on in his natural role on the right.

Pieters had to be on hand in the six-yard box to make sure Dioga Jota could not get a clean connection when Podence floated a ball into the penalty area from the left, though Burnley made it to the interval unscathed, soaking up the Wolves pressure and actually making a few forays of their own across the halfway line. But for an excellent block by Coady on Jay Rodriguez the home side might have taken the lead from the last one of them, when Gudmundsson escaped on the left and sent over a precision cross to give the striker a brief opportunity in front of goal.

Burnley turning round ahead would hardly have represented the pattern of play in the first half, though Wolves had not helped themselves by over-elaborating on occasion and failing to find the right final ball when Burnley were stretched. For all the visitors’ dominance they threatened most from corners, of which they won a few, though João Moutinho’s delivery became less reliable the longer the match went on.

Nuno Espírito Santo possibly said something similar at half-time for his side looked a bit more direct on the restart, Traoré shooting across goal when finding a team-mate might have been a better idea and Jiménez clearing the bar after Jota and Podence had combined neatly.

Romain Saïss was a tad lucky to get away with a muscular challenge on Josh Brownhill in the area, possibly helped by the fact the Burnley player stayed on his feet and attempted a shot. Had Brownhill made more of the contact the referee would have had a much more difficult decision to make. He ended up with one anyway, in the last minute of the game when Wood’s high boot could have constituted dangerous play, but at least he got it right. Wolves could have no argument about the penalty or the shared points. – Guardian