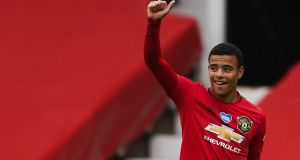 Manchester City slumped to the ninth defeat of their doomed title defence yesterday, as they were beaten 1-0 by Southampton at St Mary’s. Pep Guardiola’s side dominated but a well taken first-half strike from Che Adams - his first for the Saints since arriving from Birmingham City a year ago - was enough to give his side all three points. The result means City have now lost more league games this term than Manchester United, who extended their unbeaten run in all competitions to 16 as they thrashed Bournemouth 5-2 at Old Trafford on Saturday. And in his column this morning Ken Early has pointed to the prodigious Mason Greenwood - as well as Bruno Fernandes - as being the catalyst behind the resurgence of Ole Gunnar Solskjaer’s side. Elsewhere yesterday Sadio Mane ended Aston Villa’s resistance in the 71st minute to set up a 2-0 win for Liverpool at Anfield and leave their visitors firmly trapped in the relegation mire. Newcastle came from behind twice in a 2-2 draw with West Ham at St James’ Park, and Republic of Ireland defender John Egan struck late to earn Sheffield United a 1-1 draw away to Burnley. In tonight’s fixture, Everton travel to play Jose Mourinho’s struggling Tottenham (8pm kick-off).

Bryson DeChambeau shot a final round of 65 last night to secure victory in the Rocket Mortgage Classic last night, as a closing 72 saw Ireland’s Seamus Power fall away having been in contention throughout the week. De Chambeau finished three strokes ahead of 21-year-old Matthew Wolff to land his sixth win on the PGA Tour, as he continues to steal the headlines during golf’s return to action. And in this morning’s Tipping Point column, Malachy Clerkin has asked if DeChambeau’s bulked-up frame - he claims to have put on a stone and a half during lockdown - should be raising suspicion. He writes: “In any other sport, this would be a huge talking point. A player making such an enormous physical transformation away from prying eyes and parlaying it into such a dominant show of power upon his return would cause rampant suspicion. For whatever reason, golf seems completely fine with it.”

1 Covid-19 in Ireland: Colour-coded response set to replace phases
2 New Zealand considers freight as possible source of new Covid-19 cluster
3 Ireland among countries urged to consider reinstating Covid-19 restrictions
4 Donald Trump immediately targets Kamala Harris in campaign video
5 Moving in and out of lockdown is a recipe for economic disaster
6 Joe Biden names Kamala Harris as running mate for US election
7 Brianna Parkins: My other half is trying to get me excited about spending a summer in Ireland
8 ‘I’m afraid an intimate photo may be used to blackmail me or be sold to a porn site’
9 Michael McDowell: Free the Shelbourne Four from ‘woke’ activism
10 Let us pursue the coronavirus - not just watch its R number wax and wane
11 Standoff ensues over Minister’s unavailability at Covid committee
12 Dwayne Johnson hangs on to title of highest-paid male actor
13 Covid-19 testing under scrutiny after meat factories and creche affected
14 Russia set to begin Covid-19 vaccinations within weeks
15 Seán Moran: It won’t take much before cancelling All-Ireland looks like a solution
16 Madigan’s primary goal is Ireland caps after switch to Ulster
17 Objectors stall production of enough timber for 1,000 houses
18 Revised help-to-buy scheme opens for applications
19 ‘No demand... because there are no people’ at well-known Dublin pub
20 My sporting disappointment: Battered, bloodied, broken by The Wall
21 Majority of parents believe children now face mix of classroom and home schooling
22 AIB concedes Covid mortgage policy was ‘regrettable’
23 ‘I’ve been sleeping with my girlfriend’s sister. I need help. What do I do?’
24 Irish Michelin two-star restaurant to sell kebabs and fries from takeaway trailer
25 Dublin hospital warns HSE of ‘potentially disastrous’ fire risks
26 Maura Higgins: ‘I really hated it. Apart from that massage, the rest of it can kiss my ass’
27 Harvey Norman targets Irish property developers
28 Ward at Naas General Hospital closed due to suspected Covid-19 outbreak
29 Covid-19: The fallout for families has been immeasurable
30 The Irish Times view on resurgence of Covid-19 in Europe: adapting to the new normal
31 Seat’s new Leon: It’s now better than the VW Golf it’s based on
32 Experts examine less invasive Covid-19 testing for children
33 Employers urged to take on apprentices and get €3,000
34 Internal debate a true measure of Coalition Government’s strength
35 An Garda Síochána criticised for Irish-language law non-compliance
36 Lowest numbers in two weeks as one more Covid-19 related death and 35 new cases reported
37 Government begins work on new medium-term plan in Covid-19 era
38 View from Melbourne: Sporting fabric of the city suffering from second lockdown
39 Covid-19: UK reports highest number of new cases since June
40 Minister promises Leaving Cert students grades will be assessed fairly
Real news has value SUBSCRIBE