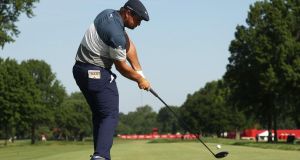 Bryson DeChambeau drives from the 17th tee during the second round of the Rocket Mortgage Classic at Detroit Golf Club. Photograph: Gregory Shamus/Getty Images

There’s an upside and a downside to golf getting back going ahead of most of the other TV sports. The upside, obviously enough, is the return itself. It’s a simple pleasure that has more going for it than might seem the case. We all need something to cling to. Whether that’s a nervy first lunch back at your favourite café or a night in front of the Rocket Mortgage Classic, the urge is the same. To find a little reassurance, to season the new normal with the flavours you remember enjoying in the old one.

The downside for golf is that its warts are all on show. More of its curios are magnified now that it has so little competition for eyeballs. Ordinarily, a dog-day mid-summer tournament like the Rocket Mortgage Classic would be completely lost in the mix of everything else that was going on. A non-Major at this time of the year would be strictly Vauxhall Conference. It wouldn’t be mapped.

Instead, yesterday morning, you couldn’t move for chat about Bryson DeChambeau. At least in my admittedly golfy little timeline you couldn’t. By the time you read this, he may very well have won the tournament outright but that wasn’t what the kerfuffle was about. Instead it was an incident halfway through his third round, in which he berated a cameraman for, well, being a cameraman.

On the seventh hole of a fairly mixum-gatherum front nine, DeChambeau made a hames of a bunker shot and left himself 20 feet from the hole. He had just come off a bogey on the sixth and was clearly raging with himself, belting his club into the bunker in a fit of temper. When he was finished the hole, he marched over to the masked-up cameraman at the side of the green and berated him for a full minute. Golf Channel reporter Will Gray asked him about it after his round.

“He was literally watching me the whole entire way up after getting out of the bunker, walking up next to the green,” DeChambeau whined. “And I just was like, ‘Sir, what is the need to watch me that long?’ I mean, I understand it’s his job to video me, but at the same point, I think we need to start protecting our players out here compared to showing a potential vulnerability and hurting someone’s image. I just don’t think that’s necessarily the right thing to do.”

Hmm. Okay Bryson. The notion that the literal recording of reality is a biased move against you is pretty paranoid, even by the out-there standards of the professional sportsman. Ultimately, though, it’s a small piece of nonsense that has no particular fall-out with which to be detaining ourselves. Golf Arsehole Punches Down is the Dog Bites Man of the sports world.

DeChambeau is an interesting enough in other ways, especially given his recent, eh transformation. He has always come across as a bit of a tosser. It’s just that now, he’s a massive one.

If golf isn’t your bag, consider the following scenario for someone in your own sport. Imagine an athlete doesn’t compete in public for two months, as was the case with DeChambeau between October and December of last year. Imagine that upon his return – at the President’s Cup team event in Australia – the clothes for which he’d been fitted earlier in the year are now too tight. His neck size has gone out by an inch, his chest size by two. Imagine this athlete putting on a stone and a half of muscle mass in two months and not stopping there.

Spin the tape along and imagine the pandemic hitting the following spring and giving everyone – said athlete included – three months to go away and prepare however they pleased for the resumption of their sport. Imagine that athlete then coming back with another stone and a half of muscle on him, making it somewhere in the ballpark of three stones added in nine months.

Now imagine it in a sport with a notoriously toothless anti-doping record. One whose laxness on the issue has prompted Rory McIlroy to lament that he could take human growth hormone and get away with it. One that has a policy of not even making public the occasional drug suspension that comes along.

Given all that context, imagine this athlete coming back after the pandemic and outstripping the competition in the most power-based aspect of the sport every day he goes out. DeChambeau’s driving in the four tournaments since the resumption has been cartoonishly dominant. Pick any driving stat you like, he leads it. Going into the final round yesterday, he had 10 drives of over 350 yards for the week. Nobody else in the field had more than five.

It’s at this point where the libel laws insist that it is made clear that there is no suggestion that DeChambeau has done anything untoward in gaining all this bulk. His social channels have been all over his transformation from the start, posting footage of his daily gym sessions and so on. Every second reference to him on TV broadcasts seems to mention protein shakes and a revolutionary gym routine and all that jazz. Until we hear otherwise, that must all be taken in good faith.

Doesn’t mean the question shouldn’t be asked, all the same. The transcripts of every DeChambeau tournament press conference are up online and in four weeks, there hasn’t been a single doping question put to him. Not even, ‘Have you been tested since the restart?’ This may be doing a disservice to the journalists on the ground who could very well be asking him these questions ad-hoc in the locker-room or wherever. But if they are, none of the answers have made it into print.

In any other sport, this would be a huge talking point. A player making such an enormous physical transformation away from prying eyes and parlaying it into such a dominant show of power upon his return would cause rampant suspicion. For whatever reason, golf seems completely fine with it.

That should make us far more uneasy than a tantrum at a cameraman.

Niall Quinn and Brian Kerr differ on role of outsiders in FAI 06:00
New team, fresh start, has Dan Martin shooting for the stages 06:00
Sporting Cathedrals: Cheltenham reveals all about the wonder of racing 06:00
Fathers, sons and soccer: Reflections on the family business 06:00
Different Strokes: Bryson DeChambeau’s rules debates doing him no favours 06:00
Here is your handy guide to sport on television this week