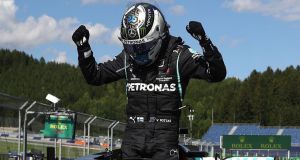 Valtteri Bottas took the win for Mercedes at the Austrian Grand Prix as teammate Lewis Hamilton suffered a dramatic late-racing demotion from second to fourth.

Formula One had opened its long-delayed 2020 season with the same controlled dominance from Mercedes with which they had closed 2019. Yet the final positions ebbed and flowed to the very close. Attrition caused a swathe of retirements across the field and Hamilton was penalised after a clash with Red Bull’s Alexander Albon. McLaren’s Lando Norris took his first F1 podium in third behind the Ferrari of Charles Leclerc. Carlos Sainz was fifth for McLaren.

Hamilton had already suffered a last-minute setback with a three-place grid penalty from second to fifth, imposed after Red Bull had protested the FIA decision not to penalise him for failing to slow under yellow flags during qualifying. The protest was submitted an hour and half before the start and the FIA reviewed the video evidence and imposed the grid drop from second to fifth just 40 minutes before the off.

Hamilton had expressed disappointment on Saturday that some drivers had not spoken out publicly to condemn racism but as had been planned all drivers wore “End Racism” T-shirts, except Hamilton who wore a Black Lives Matter shirt. There was however no consensus on who would choose to take the knee with some drivers having misgivings.

Ultimately Hamilton, F1’s only black driver who has been vocal in his support of BLM and active in encouraging the sport to embrace diversity, did take the knee alongside 13 other drivers. Max Verstappen, Charles Leclerc and Kimi Raikkonen were among the six who did not. F1, who have created a We Race As One initiative to promote diversity within the sport, also displayed a prominent “End Racism” banner on the grid.

Bottas made a clean start to hold his lead from pole but Albon in fourth was in no mood to give ground to Hamilton and the pair vied through the first lap with Albon robustly holding his place.

Bottas promptly opened up a clear two second lead from Verstappen, who was on the harder tyre, while McLaren’s Norris was swiftly passed by Albon and Hamilton for third and fourth. Hamilton caught Albon on lap seven and made a clean pass at turn four on lap nine into third place.

High hopes at Red Bull were dashed however when Verstappen had an electrical problem with anti-stall apparently repeatedly kicking in on lap 11. He fell back through the field and was forced to pit, where the car was retired. The winner here for the last two seasons, Verstappen was furious while Mercedes once more had the one-two they had secured in qualifying, with Hamilton seven seconds back from his teammate.

Hamilton began the process of reeling in Bottas dropping the gap to 4.5 seconds when the safety car was deployed on lap 26 after Kevin Magnussen stopped on track with a brake failure. Both Mercedes drivers promptly pitted to take the hard tyres and they had closed with one another when racing resumed on lap 31. They were already in a battle of their own, exchanging fastest laps but Hamilton was eager to make a move on his teammate. He was warned however that Mercedes were going to have both drivers turn their engines down for reliability purposes.

Hamilton was within DRS range by lap 41 but Mercedes were very concerned over potential damage to the gearbox from the kerbs and both drivers were instructed to drive with circumspection, given the rate of attrition that saw nine cars retired. Hamilton eased off and the gap held at just over one second. Williams’s George Russell lost power on lap 51 and with a second safety car pit stops once more ensued with Albon taking the softs but the two leaders stayed out. Racing resumed on lap 55, Bottas holding his lead only for Raikkonen to lose a wheel on the final corner, immediately promoting the safety car once more.

Ten laps remained when they began racing again and while a one-two seemed assured, Albon swarmed all over Hamilton but spun out after the pair touched one another through turn four. The incident was investigated by the stewards and Hamilton given a five-second post-race penalty. Mercedes finished one-two but the penalty promoted Leclerc to second and Norris to third. Bottas had held his cool however to take the flag as his car held together even as Albon suffered a late retirement. - Guardian