Monica Seles: The warrior queen who could have been the best ever 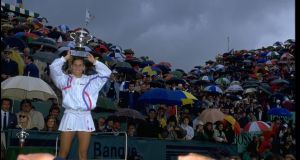 Shortly before his death in 1990, the tennis fashion designer, historian and author Ted Tinling, whose immersion in the women’s game began as Suzanne Lenglen’s personal umpire in the 1920s and who knew all the greats from Helen Wills Moody to Steffi Graf, delivered an extraordinary prophecy.

“Monica Seles is the most electric happening in tennis since Lenglen,” he said. “She lights up the court and can hit the ball harder than anyone I have ever seen.”

Seles was 16 and had yet to win a grand slam but Tinling knew his tennis and with every murderous double-fisted forehand and malicious double-handed backhand the teenager quickly set about proving him right.

Martina Navratilova was the first exalted player to succumb to Seles’s power in the 1990 Italian Open final when she was thumped 6-1, 6-1. Navratilova likened the experience to being “run over by a truck”. And with good reason: Seles’s brand of heavy metal tennis featured 37 winners and only six unforced errors.

A month later Seles became the youngest winner in the history of the French Open by beating Graf 7-6, 6-4. The German had won nine of the 10 previous grand slams behind a huge serve and forehand, while such was her lung capacity that scientists once predicted she could have been a European 1500m champion on the track.

Yet Seles refused to be intimidated. Her forceful returns blunted Graf’s serve, the quality of her groundstrokes pinned her opponent back and her astonishing mental fortitude – another of her many skills – enabled her to save four set points in the first set tie-break before fending off her illustrious opponent to win the match.

Soon winning became second nature. Incredibly from 1991 to 1993 Seles won seven of the eight grand slam tournaments in which she played, posting a 55-1 record, and also reached the finals of 33 out of 34 tournaments. And then – in one of the most shocking moments in sports history – the 19-year-old was stabbed in the back by a deranged Graf fan while playing in Hamburg.

She was never the same player again. How could she be, when she was out for more than two years? And when stepping on the court felt like returning to the scene of the crime? As Seles admitted to the Observer’s Tim Adams in 2009: “I had grown up on a tennis court – it was where I felt most safe, most secure – and that day everything was taken away from me. My innocence. My rankings, all my income, endorsements – they were all cancelled.”

Seles’s biggest battles were no longer between the tramlines. Depression hit her hard and she was diagnosed with post-traumatic stress disorder. On top of that, her father – who would endlessly watch her hit balls in a car park as a child with a net strung between two vehicles – was diagnosed with cancer. In her moving autobiography, Seles talks of how she began to binge on chocolate pretzels, crisps, Pop-Tarts and ice cream – a problem that often led to her weight ballooning after she returned to the tour in 1995.

She was still an excellent player, winning a final grand slam title in 1996 and an Olympic bronze medal in 2000, but she no longer hit the very highest notes.

Yet if the wheels of history had spun in a different direction we could be easily talking of Seles as the most successful player of all time. She was statistically the greatest teenager in history, having raced to eight grand slams barely a month after turning 19. To put that number in context her nearest rival, Graf, had won six by the time she was 20. Margaret Court had four, Chris Evert two. Serena and Venus Williams had only one between them, while Navratilova was yet to get off the mark.

Who could have stopped Seles motoring along at a similar rate for another six or seven years by which point she would have raced past Court’s record of 24? Not the Williams sisters: as great as they are they only started winning slams around the turn of the millennium. And while Graf would have remained a major threat in their six encounters between 1991 and 1993, Seles had the edge, winning four.

It’s also highly likely Seles would have kicked on again in her early 20s. As her former coach Nick Bollettieri once put it: “She will not accept that she can’t do something and she’ll spend 40, 50, 70 hours working just to get one shot. I used to tell her: ‘Your boyfriend is your Prince ball machine’, she spent so much time with the thing … I find it very difficult to pick out any weakness in her or her game.”

Perhaps volleying was one area that needed honing and sharpening. When she beat Navratilova in a Wimbledon classic in 1992, for instance, she made only one volley winner. Not that it mattered given she hit 48 successful passing shots. That year she reached the final at SW19 despite the British tabloids hounding her over grunting. Peter Ustinov cruelly joked: “I pity Monica’s neighbours on her wedding night.” Imagine being a teenager and hearing that?

Seles ended her career ranked eighth on the list of grand slam winners. Navratilova believes that, without the horrific stabbing incident, “we’d be talking about Monica with the most grand slam titles. This guy changed the course of tennis history, no doubt about that.”

It’s hard to argue. At her peak Seles had dynamite on her strings and ice in her veins – and was undoubtedly tennis’s original warrior queen. - Guardian

Rory McIlroy hoping course-and-distance form will stand to him at Harding Park 20:11
Gareth Bale left out of Real Madrid squad to face Manchester City 19:41
Babar Azam shines between showers as Pakistan make solid start in first Test 19:31
Arsenal announce plans for 55 redundancies due to effect of coronavirus 18:24
Shane Lowry knows back-to-back Major hopes down to his putting 18:23
Here is your handy guide to sport on television this week