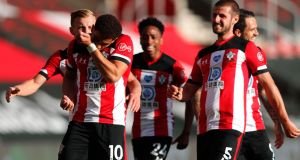 Che Adams celebrates with his Southampton team-mates after scoring the only goal in the Premier League game against Manchester City at St Mary’s Stadium. Photograph: Frank Augstein/Pool via Getty Images

It is a moment that Che Adams will cherish forever. Making his 30th appearance for Southampton, following his £14 million move from Birmingham City last summer, the striker finally scored his first goal for the club and what a goal it was.

Seizing on a loose ball as Manchester City tried and failed to play out from the back, initially through Ederson, Adams sent a glorious chip over the back-pedalling goalkeeper from 40 yards to shape what became a contest of attack versus defence.

City brought the former, dominating the ball, taking up residence in the Southampton half and creating chance after chance. Southampton brought the resilience, putting their bodies on the line, throwing themselves into tackles and blocks and relying on their goalkeeper, Alex McCarthy, when they needed him.

For a game with supposedly little on it, it was gripping entertainment and when it was all over, Southampton had an unlikely victory and City their ninth Premier League defeat of a chaotic and failed title defence.

It was the first of four league games for City before the FA Cup semi-final against Arsenal on Saturday week and, for Guardiola, the continuation of a balancing act with his squad. He left out Kevin De Bruyne and Phil Foden from last Thursday’s win over Liverpool, plus four others, but his starting XI still bristled with quality. When a manager can recall Fernandinho, Riyad Mahrez, Bernardo and David Silva, it is fair to say that he has riches at his disposal.

Ralph Hasenhüttl had given Adams his first league start since December 28th and the striker was desperate to impress and, of course, end his barren run. At first, it felt as if he was trying too hard.

In the sixth minute, Adams had a sighting of goal after a slice from Aymeric Laporte only for him to try to take the cover off the ball. It flew off target, straight into his team-mate, Nathan Redmond, inside the six-yard box. But when Adams had a second chance in the early running, everything came together for him.

Stuart Armstrong robbed Oleksandr Zinchenko as City tried to play out from the back and when the ball broke to Adams, 40 yards out and with Ederson off his line, he knew what he had to do. Taking on the shot first time, he got it up and over the goalkeeper and with the perfect amount of bend to bring it back inside the post and into the net.

The goal stung City into action and it was a minor miracle that Southampton got to half-time having not conceded. The visitors’ most dramatic forward thrust saw Fernandinho hit the post from the edge of the area, David Silva extended McCarthy with a header on the second phase and Raheem Sterling bent inches wide on the third. Apart from that, Gabriel Jesus could not react in time at the far post after João Cancelo had flashed a shot across goal while McCarthy saved from both Sterling and Mahrez.

And yet Southampton might have scored a second on 44 minutes after Danny Ings timed a run in behind Eric Garcia and Laporte to meet Kyle Walker-Peters’s lovely ball in. Ings lifted high – a major let-off for City.

The result that City most want in the coming days is from the Court of Arbitration for Sport. The body is set to rule by next Monday on whether the club’s two-year Champions League ban for financial irregularities should stand. But they did not want to go down here and they continued to press hard onto the front foot in the second half.

City advertised the equaliser extensively and, for long spells, Southampton struggled to escape their own half. Jesus flicked a header wide from a Mahrez corner and had another saved by the over-worked McCarthy; David Silva was denied by the goalkeeper at close quarters and a Jesus scissor kick hit Jack Stephens.

Guardiola introduced De Bruyne and Foden, although the pattern was entrenched, through to the Belgian’s late free-kick. Bernardo Silva watched a shot deflect inches wide while Jesus blew a gilt-edged header. Armstrong drew a save from Ederson on an isolated counter but it was all about what his team did at the other end. – Guardian

1 Sligo meeting abandoned after four races due to safety concerns
2 The game they loved so well: How cricket united Hume, McGuinness and McCann
3 A new putter for Tiger Woods is something worth noting
4 Nicola Sturgeon ‘furious’ as players’ pub trip sees Aberdeen game postponed
5 Brooks Koepka out to win Majors, not make friends
Real news has value SUBSCRIBE