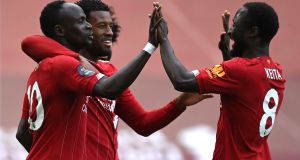 On the surface the scoreline reflects what might be expected when newly crowned Premier League champions meet relegation-threatened visitors who can not keep a clean sheet away from home. But this was a glaring opportunity missed for Aston Villa. Liverpool were in procession mode yet they still made it 17 wins from 17 Premier League home games this season thanks to Sadio Mané and Curtis Jones.

Mane’s breakthrough and Jones’ first Premier League goal, arriving a day after he signed a new five-year contract with his boyhood club, made it 300 goals in 127 games at Anfield under Jürgen Klopp. His team have dropped an astonishing four points from the last 111 available on home soil and are unbeaten in 57 league games at Anfield.

Villa are the only Premier League team not to have kept a clean sheet on the road this season. They should have taken something from this game to aid their fight for survival but a lack of quality in the final third was their undoing.

Villa’s players, substitutes, coaching staff and even the match officials formed a guard of honour to welcome Liverpool on their first appearance at Anfield since being crowned champions. The last time Liverpool had started a game here as league champions was 1 May 1990, a 1-0 defeat of Derby County that proved to be Kenny Dalglish’s final appearance for the club. Dalglish was among the few present for the 2019-20 title winners’ return home, sat without company in the directors’ box and facing the stand that now bears his name. A banner proclaiming “Liverpool FC – Champions Again” was stretched across the seats in the upper tier of the Sir Kenny Dalglish Stand. But this was not a feast fit for a king.

As in Thursday’s drubbing by Manchester City, Liverpool lacked the zip, conviction and aggression that has shaped their dominance of the Premier League this season. Villa, desperate for any encouragement in their bid to climb out of the relegation zone, will have been relieved at the champions’ passive attacking play. Divock Origi replaced Roberto Firmino in the Liverpool forward line but Pepe Reina was barely tested in the first half of his Anfield return. Mohamed Salah had the hosts’ only decent opportunity before the break but his scuffed volley from Douglas Luiz’s inadvertent flick-on was saved comfortably by the Spanish veteran. Klopp was visibly annoyed as his players traipsed over for their first drinks break, Alex Oxlade-Chamberlain and Fabinho the manager’s main targets for a dressing-down.

Villa were comfortable in defence and lively down the flanks through Mahmoud Trézéguet and Anwar El Ghazi, although short of the creativity required to take full advantage of Liverpool performing in fifth gear. Ezri Konsa headed over from a Jack Grealish free-kick and Douglas Luiz shot powerfully but straight at Alisson after Trézéguet teed him up on the edge of the area. The Villa midfielder also went down looking for a penalty when Naby Keïta touched his heel on the stroke of half-time. Contact was slight, the collapse was delayed and embarrassing, and both referee Paul Tierney and VAR rejected Luiz’s appeals.

Mercifully a game broke out in the second half. Liverpool’s full-backs began to find their range although Salah just failed to connect with Trent Alexander-Arnold’s first inviting delivery and Neil Taylor was on hand to clear Andy Robertson’s dangerous pull-back from the byline. Villa, with Grealish increasingly prominent, countered with several promising attacks of their own. The visiting captain forced Alisson into a fine save but was offside when John McGinn found him inside the area. He led a breakaway that ended with Alisson pushing away El Ghazi’s first-time shot towards his near post. From the resulting corner Tyrone Mings headed across the Liverpool goalmouth but Origi hooked clear. Virgil van Dijk then stood in the way of Grealish’s attempt to beat Alisson following another threatening counterattack.

Villa’s chances were not gilt-edged but a more ruthless team could easily have spoiled Liverpool’s 100 per cent home record. They were also made to regret a rare lapse in concentration in defence when Mané opened the scoring with his 50th Anfield goal for Liverpool. Smith will have good reason to question the space available inside Villa’s area when Alexander-Arnold strolled forward and picked out Keïta. The Liverpool midfielder was completely unmarked on the left of the penalty area and, with defenders slow to react, had time to control and size up his options. He threaded a pass into the path of Mané and Reina was unable to prevent a close-range shot finding the roof of the net.

The triple introduction of Firmino, Jordan Henderson and Georginio Wijnaldum had injected more urgency into Liverpool’s display before the breakthrough. The later addition of Jones would also pay dividends for Klopp. The 19-year-old began the move that led to his first Premier League goal. Henderson took over and found Robertson, whose deep cross was headed down at the back post by Salah for Jones to beat Reina with a half volley that took a slight deflection off Mings en route to goal. Liverpool had their 24th consecutive home league win. Villa had that all-too familiar sinking feeling. - Guardian