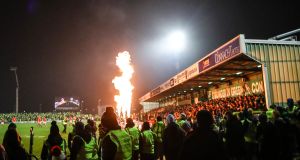 The Sportsground in Galway will be redeveloped into a modern stadium with a capacity of 12,000. The current pitch will be replaced with synthetic grass.

Over €2 million is being withheld from the FAI’s Munster Centre of Excellence in Glanmire until issues concerning the governance of the FAI are resolved to the satisfaction of the Department of Transport, Tourism and Sport.

With over €77 million announced under the new Large Scale Sport Infrastructure Fund (LSSIF) for projects around the country, the €2,025,699 allocated to Munster soccer for phase one of the development of facilities including a grass and artificial pitch with floodlighting and dressing rooms is not being handed over despite the association meriting the allocation.

“If the project advances, it remains the position that no payments will be made until the Department is satisfied that all issues of concern around financial management and corporate governance at the Association have been resolved,” explained a statement from the department.

“The appointment of the Independent Chairman and Directors to the Board on January 8th, 2020 is a significant step forward in this regard.”

The big winners in the handout were rugby and GAA with Leinster Rugby’s ground at the RDS in Dublin’s Ballsbridge receiving €10 million towards the €46,573,435 costs of constructing a two tier grandstand to replace the existing Anglesea stand and terrace. Horse Ireland will also benefit from the grant.

Connacht Rugby’s Sportsground development also receives €10 million towards the €30 million cost of a High Performance Training Centre and a modern stadium with a 12,000 capacity, while the Munster Branch of the IRFU received €1,512,017 for a variety of projects including a floodlit 3G playing surface and indoor training facility.

Four GAA projects in Walsh Park, Waterford, Parc Tailteann, Renville in Galway and St Conleths, Kildare drew in over €16 million for developments. The redevelopment of Parc Tailteann in Navan, which will benefit men’s and women’s Gaelic football and Camogie includes a 4,000 seat stand and general refurbishment. It received €6,273,139 towards a €11,948,837 total cost.

Dundrum South Dublin Athletics Club (DSDAC) has secured significant Government funding to assist in the long-awaited development of a new athletics track and multisport campus at the St Thomas grounds in Tibradden, Rathfarnham. In a joint application with Dún Laoghaire Rathdown County Council and seven governing bodies of sport, including Athletics Ireland, the project received €5,250,000 in funding.

The full cost of the St Thomas project is estimated at €10 million, and work is now set to begin on a phased basis. DSDAC first purchased the property and site in 2013 for €1.25m, which includes a Georgian residence on about 15 acres in Rathfarnham. The property on Tibradden Road, which was also the home of former Irish Times chairman and chief executive Major Tom McDowell, was purchased out of €2.5 million savings DSDAC has amassed over 30 years.

“Before the establishment of the LSSIF, Government funding for large sports projects was decided on an ad-hoc basis,” said Minister Shane Ross. “The fund provides a robust and transparent mechanism for the allocation of funding to develop the best high quality sports facilities across all regions.”

Athetics is also well represented with €9,225,000 going towards the €22,900,000 cost of constructing a high performance athletics indoor facility and a resurfacing of the existing outdoor track at the Cork Institute of technology.

There was also good news for Newcastle West in Limerick, where €1,256,276 was allocated for the construction of an international spec running track. Greystones in Wicklow will also benefit with 309,642 going towards the cost of replacing an existing track at the Shoreline Sports Park.

While the Government is investing €77m the full cost of all projects will be in the region of €221m.

1 Ireland v Scotland: Doris’ day as Caelan set for first cap
2 Six Nations: Pundits, journalists and players have their say
3 The Offload: Doris, Kelleher and Cooney to give Ireland a new look
4 Sports Extra customers get every LaLiga match at no extra cost
5 Rafael Nadal keeps his cool as Nick Kyrgios goes out swinging
Real news has value SUBSCRIBE
Here is your handy guide to sport on television this week