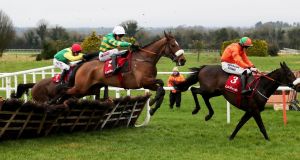 Ten years after Silver Birch’s Aintree National success catapulted Gordon Elliott into the limelight, this season’s leading trainer won’t have the former ante-post favourite Don Poli to try to repeat that Liverpool triumph in April but a Navan hat-trick on Sunday will ease any disappointment.

It may be just three weeks to Cheltenham but the reverberations from Michael O’Leary’s row with the senior British handicapper, Phil Smith, over his handicapping of the Ryanair boss’s top three National entries continues to compete for focus with the Festival.

O’Leary had an arm in a sling at Navan – “repetitive stress injury writing cheques to trainers!” – but still came out punching about the National weights, stressing again that the trio of Don Poli, Outlander and Empire Of Dirt, would not line up at Aintree.

Asked what he wants from the British Horseracing Authority handicap team, O’Leary said: “Just be consistent. If you’re going to change the policy of compressing the weights to encourage good horses to run and instead inflate them, then tell us beforehand and we won’t enter. It’s not about the money but it does cost €1,100 to enter each horse in the National.

“I have some sympathy for the English handicapper in terms of people going over for low-level handicaps at Perth or wherever. But these are Grade One horses. Phil Smith has made a career out of compressing the National weights and now he inflates them. So those three horses won’t be running.”

Instead he nominated the Cheltenham Gold Cup for both Outlander and Don Poli, with Empire Of Dirt likely to join Sub Lieutenant in the Ryanair Chase.

O’Leary didn’t rule out some of his lower-rated Aintree entries lining up in Liverpool but emphasised that an increased €500,000 pot makes the Irish National at Easter an attractive alternative.

That will be music to Elliott’s ears as his season-defining duel with Willie Mullins for the trainer’s championship continues and if that is something of an upheaval of the old order Elliott is clearly also an unlikely diplomat when it comes to keeping happy a variety of high-powered owners used to getting their way.

Elliott’s initial reaction to the controversial Grand National weights announcement was to declare Don Poli a definite Aintree runner. O’Leary wasn’t long in bluntly contradicting that. But if success is the racing currency that Ireland’s champion owner desires most, then Elliott continues to provide it.

Identity Thief was ruled out of the Flyingbolt Novice Chase but Bryan Cooper switched Gigginstown’s first-colours to Ball D’Arc who enjoyed a Grade Three procession once the odds-on JP McManus-owned favourite Ballyoisin fell at the third last.

Half an hour later Elliott saddled Dedigout for Gigginstown in the Grade Two Ladbrokes Boyne Hurdle but it was Sutton Place, owned by O’Leary’s great rival, JP McManus, who led home the trainer’s one-two.

It was a fifth win in a row for Sutton Place, who will miss out on Cheltenham and could instead wait for another Grade Two at Fairyhouse over Easter.

“The ground wasn’t ideal but he showed his class,” said Elliott who also landed the bumper with Poli Roi. “We were riding him maybe a little negatively with the trip. Barry [Geraghty] said you’d be better off grabbing a hold and riding a race. Chasing will be his game.”

Sunday’s other Grade Two, the Ten Up Novice Chase was won in spectacular style by the all-the-way winner Acapella Bourgeois. Nothing came close to landing a glove on the dour-staying mud-lover, who ultimately won by 32 lengths under Roger Loughran, with bookies cutting his RSA price to 16/1.

It was a major boost for Acapella Bourgeois’s trainer Sandra Hughes who lost the patronage of Gigginstown last May, just over a year after winning the Irish National for them with Thunder And Roses.

However, her latest star stayer looks to have the potential to keep everyone involved with him pretty flush.

“He goes on really testing ground and that’s the key. He showed how good he is today. If Cheltenham came up very good we might give it a miss but he’s a proper horse with lots of options,” Hughes said.