Harry Kane the hat-trick hero as Spurs ease past Fulham 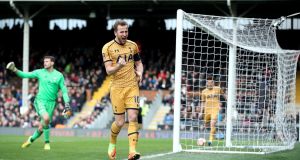 It is safe to say Tottenham Hotspur have hauled themselves from that “negative run” of which Mauricio Pochettino had complained in midweek. This was a saunter on the banks of the Thames, a dominant display to dispatch a potentially pesky Fulham from this competition and secure passage into the quarter-finals. Victory, courtesy of Harry Kane’s slickly taken hat-trick, should have a restorative effect with energy and conviction restored to their approach. Their challenge is ongoing on three fronts.

Mauricio Pochettino and his players had needed this. They pinged their passes with glee through the later stages, all hint of resistance having dissipated, and revelled in the freedom of it all. Some of the pizzazz lacking over recent weeks had returned here, players who had been so lethargic at Liverpool and in Ghent in midweek more like their old effervescent selves against Championship opponents whose eagerness to impress ended up making them look rather naive.

There was too much space for Spurs to exploit, too many inviting openings in the home side’s defensive ranks with Kevin McDonald unable to plug the gaps alone. Fulham’s other midfielders were all attack-minded, their instincts forever to scuttle upfield rather than to suffocate or frustrate. At times they were simply overrun, passes slipped easily between centre-halves and full-backs for overlapping players to collect. By the interval Tottenham’s lead still appeared slender, but the tie should have long since been settled. Regardless, their win ended up feeling like a thrashing.

Their opening goal, a first from open play in more than six hours stretching back to the winner against Wycombe Wanderers in the previous round, owed much to the excellent Kieran Trippier’s quick thinking. He launched a throw-in beyond a dawdling Scott Malone down Spurs’ right flank for Christian Eriksen to chase, with his centre arcing beyond Tomas Kalas for Kane to convert on the volley. The striker’s inclusion had actually constituted a surprise given the kick to a knee he had endured in Belgium on Thursday night, but he would enjoy putting these opponents to the sword. By the end, his goal tally for the season had been swollen to 19.

Other first-half opportunities were passed up, Dele Alli fizzing a shot just wide and Kalas almost converting into his own net as he dived in to choke Eriksen’s charge into space. Marcus Bettinelli did well to turn that inadvertent effort behind. Regardless, with Trippier and Eriksen tormenting Malone, and Harry Winks busily influential in the centre, Spurs always gave an impression of control for all that the occasional pang of complacency still offered the hosts some hope. Michel Vorm’s poor clearance had almost been belted back beyond him by Tom Cairney midway through the opening period while an error by Jan Vertonghen, back after ankle ligament damage, was nearly punished by Stefan Johansen from distance.

Those opportunities served as a warning but, with a diminutive front-line labouring to pick Tottenham apart, the better chances were always prised out by the visitors. Six minutes into the second half Winks and Trippier combined once again to pull the left-side of Fulham’s rearguard out of position. Eriksen’s whipped delivery was almost identical to that of the first half, Kane exploiting Tim Ream on this occasion to sidefoot in from close-range while home players appealed – justifiably but in vain – for offside.

The England striker thought he had passed up the chance to complete a hat-trick when he lofted Alli’s prodded pass over the bar, but that combination were not to be denied for long. The midfielder was soon slipping the forward clear between the home side’s centre-halves, with Kane’s finish whipped and emphatic.

There was no disgrace in defeat, but Fulham’s frustration was born of the reality they can play better than this. A side who had thrilled in expelling Middlesbrough and Hull City from domestic cup competitions this term found Tottenham a class apart and were never permitted the chance to whip up their own upbeat rhythm. Ryan Sessegnon, who counts Spurs among his suitors, did inject some thrust down the left and McDonald planted a free header just over the bar, but there was a gulf between these sides. Slavisa Jokanovic’s team had needed their opponents from across the capital to replicate their sloppy recent displays to stand a chance. But Spurs had finally woken up.