US Women’s Open: Ariya Jutanugarn in tie for lead after first round 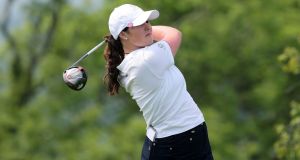 Olivia Mehaffey will hope for a much improved second round in Alabama. Photograph: Lorraine O’Sullivan/Inpho

Ariya Jutanugarn is tied for first place with a two-shot lead after the first round of the US Women’s Open.

Olivia Mehaffey, the only Irish player in the field, suffered a disappointing first round with a double bogey on the eighth leading to a four-over par round of 74.

The 20-year-old Irish amateur on scholarship at Arizona State, recovered with one of her three birdies on the ninth, but it wasn’t enough as two bogeys on the back nine followed three on the front to leave her down in 96th position.

Jutanugarn, of Thailand, eagled the par-five sixth but was caught by Sarah Jane Smith and Jeongeun Lee on five-under 67, with bogeys on the 2nd and 13th holes the only shots denting her momentum.

Australian Smith herself shot an eagle on the par-five 11th after early back-to-back bogeys, but five birdies helped to leave her in contention early in the week.

Speaking of her first-day lead and lowest opening round, she told LPGA.com: “I’ve putted better than I have in a long time. It’s felt like it’s been coming along, I just haven’t been seeing them fall in, and today they basically all fell in, so it was kind of nice to see that.”

The weather-hit practice rounds appeared to have little effect on Lee, who shot a bogey-free round with five birdies, leaving the trio two shots ahead of Americans Michelle Wie and Danielle Kang and Swedish amateur Linn Grant.

England’s Mel Reid is three shots adrift of the leaders going into day two after six birdies left her on two-under 70 — and a good start in her campaign to make England’s UL International Crown team.

Defending champion Sung Hyun Park, of South Korea, mixed two double bogeys with four birdies in a round of 76 to sit in joint 96th on four over.