Justin Rose four clear of field at Fort Worth Invitational 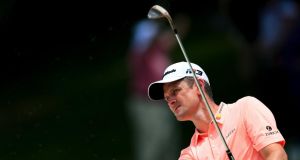 Justin Rose plays his third shot on the fifth hole during the third round of the Fort Worth Invitational at Colonial Country Club. Photograph: Tom Pennington/Getty Images

Justin Rose is in a fine position to win the Fort Worth Invitational as he takes a four-shot lead into the final round in Texas.

The Englishman, who came into the third round with a one-shot lead, strengthened his spot at the top of the leaderboard with a four-under-par round of 66.

That takes him to 14 under overall, four ahead of American Brooks Koepka and Argentinian Emiliano Grillo.

Rose did the majority of his good work on the front nine, firing four birdies and adding another at the 11th.

He dropped a shot at the 16th, just his third bogey of the week, but it was not costly and he will be a firm favourite for a ninth PGA Tour title on Sunday, which would see him equal Nick Faldo’s record for an Englishman.

“It was a good day’s work,” Rose told Sky Sports Golf. “I got off to a dream start and I felt that nobody behind me was doing a lot, so it was up to me to build on that lead.

“It was difficult coming in, but I did a good job of getting into the clubhouse with a decent lead for tomorrow.

“A four-shot lead is a lot but also not a lot. I have got to go out there and play well, I don’t think I can sit back and play golf and put some numbers together.”

Koepka fired a three-under-par 67 to remain in contention while Grillo went round in 69.

Spaniard Jon Rahm is one of five men on eight under par after his round of 64 and last year’s runner-up will have an outside chance of going one better than 2017.

Canadian Corey Connors and American Ted Potter Jr had the rounds of the day as they fired 63s.