US Open: All you need to know about Shinnecock Hills

From the carnage of 2004 to its historic native Indian roots, this strip of Long Island is a storied place 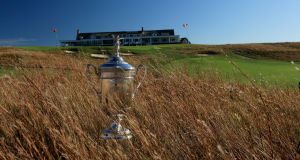 A view of the US Open trophy on the 18th hole at Shinnecock Hills where the 104th US Open will be played next week. Photo: Getty Images

What’s so special about Shinnecock Hills?

It is steeped in American golfing history. The club is one of five founding members of the United States Golf Association, who run the US Open. It opened in 1891 and has played host to four previous championships: 1896 (won by James Foulis), 1986 (Ray Floyd), 1995 (Corey Pavin) and 2004 (Retief Goosen).

Oh yeah, that 2004 championship was more like crazy golf at Pirate’s Cove, wasn’t it?

You might say that the USGA lost control of the course setup for the final round, especially on the seventh green. The course difficulty was already close to the edge before the final day but a decision was made to roll the greens on Saturday night, to deprive them of water and those actions, combined with an unusual dry north-westerly wind rather than the prevailing south-easterlies off the Atlantic, put several greens over the edge.

What happened on the Par 3 seventh hole?

Players described it as carnage, particularly the early-starters who must have felt they were thrown to the wolves. The first pairing of JJ Henry and Kevin Stadler both made triple bogeys; and Billy Mayfair, in the second pairing out, putted into a bunker. The alarm bell started to ring and the USGA instigated hand-watering of greens thereafter between groups, just to allow play to continue. It was the first and only time in the US Open’s history that such an operation was necessary, albeit too far for those pairings who had already played the hole.

Can we expect a repeat this time?

No chance, the USGA have moved away from their obsession of having courses that play firm and fast and they won’t want any repetition of that 2004 championship which was invariably referred to as “carnage” or “disaster” by players who ran up high scores.

But has the course changed much since then?

Quite a lot, actually. The most dramatic change has been to increase the yardage from 6,996 in 2004 to 7,445 yards (Par 70) this time while numerous trees and bushes have been removed to create an airier feel. Also, the fairways have been widened quite considerably – although not as wide as originally envisaged after the wind failed to blow at both Chambers Bay and Erin Hills in two of the past three championships – and will make for more generous landing areas than when Goosen won. The average width of fairways in 2004 was 26.6 yards (the narrowest was 25 yards, the widest 30 yards) whereas this year’s championship will be played on fairways averaging 41.6 yards, a full 50 percent wider.

What’s with the Indian head-dress logo?

The land on this neck of Long Island has a deep heritage with the Shinnecock Indian Nation tribe, as does the golf course. Members of the tribe – employed as day labourers – helped build the course in the 1890s. In fact, the relationship between the USGA and the tribe dates back to 1896 when the second US Open was held on the links. For generations, the Shinnecock worked at the golf club as groundskeepers and caddies.

So, guess Goosen is back to have another crack at winning at Shinnecock Hills?

No, he won’t be in the field. The South African’s 10-year exemption for winning in 2004 is up and he failed to get a special invitation from the USGA. But there will be considerable interest in how Phil Mickelson, the player who finished runner-up to Goosen 14 years ago, gets on: this is the only Major championship Lefty has yet to win, so victory would enable him to join the elite club of modern Grand Slam winners that currently only numbers five men (Jack Nicklaus, Tiger Woods, Ben Hogan, Gary Player and Gene Sarazen). Mickelson has had six runner-up finishes in the US Open through his career without managing to get the missing link to the jigsaw.

Woods is on the prowl again, having recovered from spinal fusion surgery . Woods – who has 14 career Major titles to his name – was unable to play in the US Open since 2015 when he missed the cut. He has played nine tournaments on the PGA Tour so far this season with two top-10 finishes, the best a runner-up finish in the Valspar Championship.

How many Irish players are in the field?

Three of them at the moment with Séamus Power among those on the reserve list. Shane Lowry earned joint-medallist honours in the qualifying during the week in Ohio to join Rory McIlroy and Grame McDowell, who were already exempt as former champions.

What are the tee times?