Shane Lowry secures his US Open place in Ohio

Pádraig Harrington narrowly misses out, as does Paul Dunne at Walton Heath 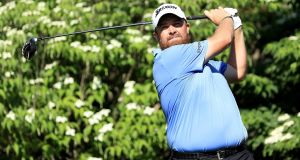 Shane Lowry will compete at the US Open later this month. Photograph: Sam Greenwood/Getty Images

Shane Lowry secured his place at the US Open later this month with an impressive round of 67 at Brookside golf and country club in Ohio.

The Irishman finished joint top of the 14 qualifiers who sealed their US Open spots, and after going one less than his first round 68 he finished the qualifying without a single bogey over 36 holes.

Lowry needed to enter qualifying for the second major of the season, because his world ranking is down at 84th. Also competing at the Columbus venue was Adam Scott who was in danger of losing his streak of playing at 67 consecutive Majors but he managed to do enough to get into the top 14, meaning that number will go to 68.

Waterford native Seamus Power agonisingly lost out in an 11-way playoff for three spots in Memphis, but he did manage to secure an alternate's spot after returning to the course on Tuesday morning. He will now rely on other players withdrawing for him to get a spot.

Starting on the back nine, Power birdied the fourth and eagled the fifth to move inside the top eight, but he bogeyed his final hole forcing him to face the playoff.

Pádraig Harrington however will not compete at the US Open for the fifth year in a row after he narrowly missed out on a qualifying place at Walton Heath on Monday.

Paul Dunne, Gavin Moynihan and Paul McBride made up the quartet of Irish hopefuls at the Surrey venue but none of them will be teeing it up at Shinnecock Hills in two weeks either after they finished well back.

With 14 places up for grabs after 36 holes, Harrington finished one shot outside a nine-man playoff for the final spot after he suffered three bogeys on his final nine holes.

England’s Andrew Johnston and James Morrison led the way while Thorbjorn Olesen – who won the Italian Open on Sunday – also secured himself a place at the year’s second Major.

For Harrington it was all going so well through 27 holes after he carded an opening round of 70 on the old course and then blitzed the front nine of the new course in four under par.

However, bogeys at the 10th, 11th and 14th – combined with just a single birdie at the 13th – did for the Dubliner’s chances as he signed for a 36 holes total of four under par alongside 15 other players who missed out on that playoff by just a single shot.

The three-time Major winner will now head for the FedEx St Jude Classic on the PGA Tour this week but even a win there would not be enough to earn a place at the US Open as he is too far back to get into the top-60 in the world rankings.

After securing a qualifying spot on the mark last year, Dunne could not do the same this time around as an opening round of 70, followed by a 73, left him four shots off the playoff.

Meanwhile, Moynihan was well placed after an opening 69 but his chances disintegrated early in the second round when he went out in 40. McBride’s rounds of 74 and 75 left him well outside the cut off in what was his first attempt at qualifying for the year’s second Major.

Rory McIlroy and Graeme McDowell are the two Irishmen already in the field as past winners.