Sky could lose PGA Tour rights in 2022 after Discovery deal 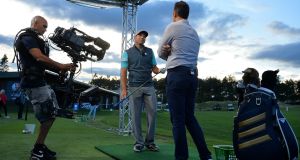 Sky Sports may lose their PGA Tour rights in 2022 after the PGA Tour struck a $2bn deal with Discovery. Photo: Getty Images

Sky Sports faces a battle to retain its status as the UK’s main broadcaster of the US PGA Tour after a $2bn deal was announced between the golfing body and Discovery. Sky’s hold on rights has already been weakened by last year’s loss of the US PGA Championship, plus an ongoing battle with Augusta National regarding the Masters.

The US PGA Tour confirmed on Monday that all broadcast rights outside of the country will be handled in partnership with Discovery – the media conglomerate which controls Eurosport – from 2019 until 2030. The announcement covers 21 markets, including Australia, South Korea and Canada.

Sky’s contract to screen US PGA Tour events runs until 2022, meaning nothing will change immediately. It must decide in the meantime whether to attempt a sub-licence agreement with what is essentially a direct rival or step back from one of its core sports.

It opted not to comment on the news as revealed jointly from US PGA Tour bases in New York and London, with insiders keen to point out the time due to run on the existing contract. Discovery has the potential to auction coverage on a territory-by-territory basis. A senior US PGA Tour source would only confirm that the UK market will be “open to negotiation” in the future.

Jay Monahan, the US PGA Tour commissioner, said: “This is an exciting next step which presents a tremendous opportunity to accelerate and expand our media business outside the United States, better service our international broadcast partners, and drive fan growth with a deeply experienced strategic global partner.

“Since 2007, the PGA Tour has negotiated all of its non-US broadcast rights deals on its own. The alliance between Discovery and the PGA Tour will capitalise on the two organisations’ expertise in managing international multi-platform rights and launching the new digital service.”

The European Tour has an agreement with Sky subject to negotiation. Keith Pelley, its chief executive and a former media executive in Canada, is known to be seeking as broad a platform as possible amid concerns about golf’s popularity with youngsters. – Guardian service