Harrington the best of the Irish on one under par 71 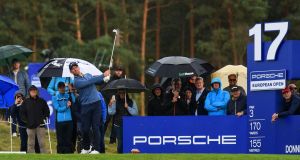 Paul Casey tees off on the 17th hole during day one of the Porsche European Open at Green Eagle Golf Courses in Hamburg, Germany. (Photo by Tom Dulat/Getty Images)

Ryder Cup star Paul Casey overcame illness and tough conditions to claim the lead after the first round of the Porsche European Open.

Casey carded seven birdies and a single bogey in an opening 66 at Green Eagle Golf Course in Hamburg, despite strong winds making the 7,500-yard layout play even tougher than usual.

On six under par the world number 17 held a one-shot lead over Austria’s Matthias Schwab, with fellow Englishman Ben Stow, Scotland’s Robert MacIntyre and Germany’s Max Rottluff all on four under.

Former Masters champion Patrick Reed had to birdie the last three holes to shoot a two-over-par 74, while world number nine Xander Schauffele was one shot better off despite dropping three shots in his last eight holes.

Padraig Harrington was best of the Irish on one under par with Gavin Moynihan and Michael Hoey both recording opening 74s.

Casey, who finished third in the Tour Championship on his last start, was delighted by his performance and told Sky Sports: “It was a really good round of golf. Sure there were a couple of putts that slipped by but that is such a difficult golf course.

“And here I stand even happier because the score doesn’t really do it justice. That’s one of the finest rounds of golf I’ve played this year. I couldn’t have hoped for better; happy to be under par, let alone six [under].”

Casey revealed he has been struggling with a sore throat for several days and added: “I’m not great, but it is what it is. Maybe beware of the sick golfer.”

Stow came into the event on the back of consecutive top-10 finishes on the Challenge Tour and recovered from starting his round with a double bogey to post an opening 68 in what could be a turning point in his career.

“There’s a level of expectation you have to manage but it is a great opportunity for us, weeks like this can be a life-changer,” the world number 347 said.

“You try and put that behind you and concentrate on your ball and the hole and hopefully the rest figures itself out. But it’s nice to play here, you get treated nicely and you feel a bit more looked after.”

MacIntyre’s brilliant debut season on the European Tour has already produced back-to-back runners-up finishes and a tie for sixth in the Open at Royal Portrush, but the 23-year-old from Oban has his sights set on more success.

“I’m pushing to try to get into the WGC event [in China in November] and I think I might have secured the final three [European Tour events] already and if you do well in those, then that opens bigger doors so it’s just about taking it step by step, week by week and see where we end up,” MacIntyre said.