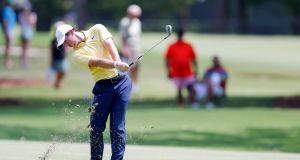 Rory McIlroy plays a shot on the third hole during the first round of the Tour Championship at East Lake Golf Club in Atlanta, Georgia. Photo: Erik S. Lesser/EPA

The kerching sound reverberated in the heads of 30 players as they negotiated the famed East Lake Golf Club layout in the season-ending FedEx Cup finale at the Tour Championship, with their eyes on a record $15 million payout to the winner. And Rory McIlroy, the only Irish player in the field, ensured he remained very much in the hunt for the jackpot with an opening round 66 that moved him to just one stroke off the lead.

Although Justin Thomas headed into the tournament starting at 10-under-par before hitting a shot in anger, there was evidence aplenty in the opening round that it was all still to play for in the championship itself as he struggled – including a double bogey five on the 15th en route to a 70 – while others flourished.

On a hot day, with the threatened thunderstorms staying away, Xander Schauffele shot a six-under-par 64 and, having started on four-under in the new FedEx Cup system which gave players a starting score, the American’s 10-under-par tournament total enabled him to claim the outright lead alongside world number one Brooks Koepka who finished with three birdies in the closing four holes and Thomas.

McIlroy opened with three pars before claiming his opening birdie on the Par 4 fourth hole, where he hit a 160 yards approach to 18 feet and sank the putt. There would be no momentum, though, as he pushed his drive on the fifth into the Bermuda rough and failed to find the green with his approach in running up a bogey five.

On the Par 5 sixth, McIlroy rebounded with a birdie when he found a greenside bunker in two and splashed out to five feet and holed the putt. McIlroy then had six straight pars before getting back on the birdie train with a wedge approach to 14 feet on the 13th where he holed the putt, and the putter stayed hot on the 14th when he sank a 10 footer to rescue par. McIlroy then claimed a fourth birdie of his round with a two on the Par 3 15th.

McIlroy claimed another birdie on the 17th, where his 135 yards approach to six feet ensured he moved to within a stroke of Schauffele. But an eight-foot birdie putt on the 18th missed on the low side and the Northern Irishman had to keep his focus to sink a six-footer to save par.

“I’m very pleased. It is so tough to shoot a score around here if you don’t hit it in the fairway . . . . to play the back nine in three-under and get in with a decent start is very nice,” said McIlroy, who finished with three birdies in the final six holes. “I’m right there with three rounds to go. East Lake is a hard course to get away from anyone, it is what I really like about this course. It is a demanding golf course. I feel if I can replicate this round for the next three days I will have a strong chance.”

Schauffele’s move came on the back of six bogeys in a bogey-free round. “I wasn’t too uncomfortable knowing I was six back (at the start), it is a very difficult golf course . . . . it is as good as I can do, so I’m very pleased,” said Schauffele.

“I can certainly say 1,000 percent I never slept on a Wednesday lead,” FedEx Cup leader Thomas had remarked on the eve of the championship and his opening round was something of a struggle as those in pursuit made immediate inroads. Thomas turned in 34 (one under on his round, 11 under for the championship) but hit speed bumps on the inward journey with a double bogey on 15 after hitting his tee shot into the water on the Par 3 leading to him losing his overall lead.

But Thomas – a former winner on the East Lake layout – kept his composure after that double ont hw 15th to par the 16th and 17th and, then, reach the back of the green on the 18th in two and two-putted for a closing birdie to join Schauffele and Koepka on the 10-under mark for the tournament after an opening round that had six players within two shots of the lead.

Round one leaderboard (USA unless stated, Irish in bold)