Out of Bounds: Rory McIlroy will provide some of the star power on this side of the pond 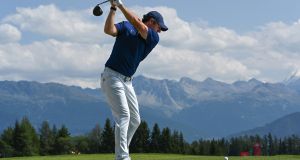 Rory McIlroy hits a shot in practice prior to the start of the Omega European Masters at Crans Montana Golf Club. Photo: Stuart Franklin/Getty Images

The whole lopsided nature of the two main professional men’s tours will be shown from here on in. As big as Rory McIlroy’s final winning putt was for him at the Tour Championship, the finale to the PGA Tour season, it was massive for the PGA European Tour because, from now until the end of the calendar year, it is their schedule which will provide the main source of golfing focus.

No more living in the shadows of the US circuit, in effect.

While the new PGA Tour kick-starts in just a fortnight’s time with A Military Tribute at The Greenbrier (yep, the tournament’s real name!) as its 2019-2020 itinerary gets under way, this is the time when the European Tour is re-energised.

Coming up, the European Tour boasts a run of tournaments that includes the remaining two regular season Rolex Series events – the BMW PGA and the Italian Open – and a WGC Champions event in Shanghai before the final three tournaments of the Turkish Airlines Open, the Nedbank Challenge and finally the DP World Tour Championship in Dubai.

In all, there will be close to €60 million in prizemoney for the 13 remaining tournaments on the European Tour schedule which represents a strong finish for those players – among them the likes of Paul Dunne – who will seek to turn disappointing seasons to date in rather more memorable ones.

Unquestionably, the poster boy for the European Tour’s run-in will be a player who doesn’t need to worry about any financial concerns.

Rory McIlroy’s pocketing of $15 million in Atlanta to bring his season’s windfall on the PGA Tour to north of $23 million, with him effectively earning $17,704 for every hole he played stateside this season, means his return to Europe – starting with this week’s Omega European Masters in the Swiss Alps – can be mainly about adding further titles to his season’s CV.

From a point earlier this year where McIlroy didn’t renew membership of the PGA European Tour – he eventually joined again in May – but that late move meant that money earned in the WGC-Mexico Championship, the WGC-Dell Technologies and the Masters tournament didn’t count towards his Race to Dubai standings and which explains why he is currently a rather lowly (by his standards) 46th place in the order of merit.

Anyway, it is a case of better late than never from the European Tour’s perspective, as it means McIlroy’s presence in the field at the Omega Masters and the upcoming BMW PGA Championship and the Alfred Dunhill Links will ensure tournaments this side of the Atlantic will hold centrestage, lopsided to the European Tour’s advantage for a change.