Out of bounds: the curious case of Bernhard Langer 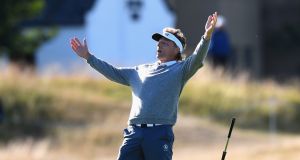 Bernhard Langer celebrates making a birdie on the 17th during the 2018 Senior Open at St Andrews. Photograph: Tony Marshall/Getty

Most golfers are obsessed with the game. From hackers to single figure handicappers, but especially at the top of the ladder: for those players who climb up rung by rung to reach the pinnacle, their careers are defined by two barometers - firstly, by how Majors they have achieved in their careers; secondly, and perhaps equally, on how many wins they have notched up.

As Tiger Woods has forever reminded us, it is all about “Ws” . . . and, on that score, the ongoing feats of Bernhard Langer, now aged 61 but still the dominant player on the Champions Tour stateside, is a further reminder of how age is not a barrier if the body and mind are respected.

That self-respect of Langer’s has seen him move to 38 wins on the Champions Tour, with only Hale Irwin - who amassed 45 titles on the seniors circuit - ahead of him. What is also worth noting, though, is that the German’s penchant for winning was formulated on the regular circuit where, including his two Major wins both at the Masters, he won 42 times on the PGA European Tour. Only the legendary Seve Ballesteros, with 50, won more.

The question remains as to whether even Langer will actually catch and move beyond Irwin’s win rate, but the way that he has kept his body fit and healthy, to the extent that he has won every single year since joining the Champions Tour in 2007, and clocking up a remarkable seven last year, means he at least will ask that question.

It is actually interesting to take a look at the different tours to remind ourselves that winning is probably harder achieved in the modern era, with bigger and greater strength of fields.

On the PGA Tour, which is effectively a license to print money for those who clock up wins, the record - 82 - is still held by Sam Snead, who - curiously - also has the distinction of being the only man to win an LPGA Tour event: that’s an altogether different story, but Slammin’ Sam’s win rate on the PGA Tour started in 1936 and extended to 1965.

Woods, like Langer’s pursuit of Irwin, is chasing him down. Tiger’s win last month in the Tour Championship brought his career haul to 80, just two behind Snead and will certainly add some extra storylines going forward as Woods, if he can stay fit, probably odds-on now to actually clock up sufficient “Ws” to set a new record.

On the PGA European Tour, it is also worth noting that Woods - who never actually took up membership at any stage in his career - is ranked third with 40 wins, behind only Ballesteros and Langer. Colin Montgomerie is ranked fourth with 31 wins and Nick Faldo is fifth with 30; while, of the current generation, Ernie Els (28) and Lee Westwood (23) are some distance behind.

There are also parallels with the women’s professional circuit stateside: Kathy Whitworth actually won more tournaments than anyone on either the LPGA Tour or the PGA Tour, surpassing Snead’s total. Whitmore’s first win on the LPGA Tour came in 1962 and by the time she won her last title, the United Virginia Bank Classic in 1985, she had 88 “Ws” to her CV.

On the Ladies Europe Tour, Laura Davies - who is nowadays plying her trade mainly on the ladies senior circuit, while also making appearances in regular events - is far and away the most accomplished player to have graced the fairways: Davies has 45 wins on the LET, with Dale Reid’s 21 a distant second.

Anyway, Langer’s on-going pursuit of Irwin continues this week in the Dominion Energy Classic. Keep an eye on him, as his obsession shows no sign of abating.