Rory McIlroy: ‘Next year I am looking out for me’ 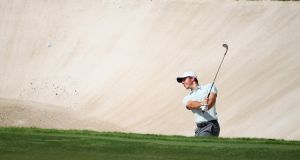 Rory McIlroy plays his second shot from a bunker on the fourth hole during the first round day one of the DP World Tour Championship at Jumeirah Golf Estates in Dubai, United Arab Emirates. Photograph: Ross Kinnaird/Getty Images

Paul McGinley described Rory McIlroy’s decision not to commit to playing four tournaments – outside of the Majors and the World Golf Championship events – that are required to retain membership of the European Tour in the 2019 as “quite extraordinary” in his Sky Sports’ column.

McIlroy indicated earlier this week in Dubai that he has pencilled in just two ‘pure’ European Tour events, the Omega Masters and either the Scottish or Irish Open.

The 29-year-old explained that he would prioritise playing in America for the first eight months of the year, would revert to a previous itinerary in playing the week before Majors, replicating what he did in three of his four victories and that he wouldn’t be unduly perturbed if he failed to fulfil the four tournament requirement in a non Ryder Cup year.

McGinley, a member of the European Tour’s board of directors, said: “It’s quite extraordinary that Rory’s not going to play just two more events to fulfil his European Tour membership next season. It’s very disappointing and it is obviously a blow for the European Tour.

“I’ve been racking my brains wondering how that can be. Obviously Rory sees it in other ways and has got his own rationale for that, although I’m finding it hard to understand. We’ve already reduced the number of events players have to play on the European Tour from five down to four, just to make it easy for the guys, like Rory, who are playing a worldwide schedule.”

Following an opening round 69, in the DP World Tour Championship, McIlroy was asked for his thoughts on McGinley’s comments. He was measured in his response and in seeking understanding that people respect his wishes, he also accepted that others were entitled to follow a similar pathway. He wasn’t upset.

“No, everyone looks out for themselves. McGinley is on the European Tour board, so he’s involved and he has to protect what he has and I get it. Everyone has to do what’s best for them. For me next year I’m trying to do what’s best for me to help get back to the best player in the world and try to win Majors again.”

McIlroy explained that he had spoken to European Tour chief executive Keith Pelley last week in South Africa to explain what his plans were for next season. “Everyone has to look out for themselves. Next year I am looking out for me. At the same time I don’t have to make a decision on it,” he pointed out until May when his membership fee for the European Tour is due. “I didn’t say it was a definite, it is up in the air. We’ll see how it goes.”

When asked whether he minds the flak he might draw he admitted: “I’d cause all the stirs in the world if I got back to winning Majors.”

McIlroy and McGinley are also intertwined from a golfing news perspective on the secondary issue of the former playing or not in 2019 Irish Open at Lahinch.

McGinley has taken over from the world number seven at the tournament host; McIlroy discharged that duty for the previous four years, something that McGinley acknowledged. “Rory has played a huge part in re-establishing the Irish Open as one of the premier events on the European Tour and we are obviously hoping he continues his support in 2019.”

He also pointed out that McIlroy was entitled to do what was best for him as a golfer and therein lies the nub of the issue at present. McIlroy and McGinley are governed by a self interest that sees them taking opposing views on a course of events that are some way distant and could manifestly change in orientation in relation to their respective stances several times.

In seeking clarity the picture is distorted by other considerations and vested interest. McGinley’s stance is understandable, so too McIlroy’s; a player deciding to follow his intuition in what’s best for his career is hardly novel or hard to fathom.