Tommy Fleetwood determined to push on in Mexico City 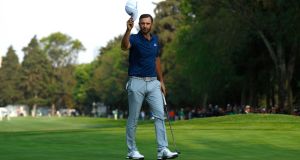 European number one Tommy Fleetwood has vowed not to rest on his laurels after making a superb start to the 2018 season.

Fleetwood comes into the WGC-Mexico Championship at a career-high of 11th in the world rankings after successfully defending his title in Abu Dhabi, finishing sixth in Dubai and fourth in last week’s Honda Classic.

The 27-year-old was a 200/1 outsider when he finished second at Chapultepec GC behind world number one Dustin Johnson 12 months ago, but is rated just a 16/1 chance to go one better this year.

“The year’s been great so far,” Fleetwood told a pre-tournament press conference. “It was important, after having such a good year to keep going, just like [Honda Classic winner] Justin Thomas has done this year.

“He just keeps progressing and that’s what you hope to do and what you’ve kind of got to do. So far so good, but you can never take your foot off the gas, you have to keep going.

“My game is getting better all the time. I’m consistently working hard, and I feel like I’m always doing the right things. My confidence is up. You’ve still got to play well, but I think when you play well you have that belief in yourself that you can do the whole week and you can be there at the end and you can win.

“That’s the big thing. I’m just very, very comfortable with where I’m at....Your performance is a result of your practice so everything I’m doing I just feel very confident that I’m doing the right things.”

Fleetwood will partner Masters champion Sergio Garcia and Sweden’s Alex Noren for the first two rounds in Mexico City, where 11 of last year’s top 20 were European.

“It is a very European layout,” says Fleetwood of the par-71 course which measures 7,330 yards, but whose highest point is more than 7,800ft above sea level.

“Last year it just reminded us of playing in Italy or some of the courses that we play. It’s a bit of an old-school golf course, and one we’re kind of used to playing a little bit. It’s still different, it’s still a long way above sea level, and the greens are a bit more slopey than what we’re used to, but the general feel when you’re walking down the fairways and seeing the tee shots is quite European.”

In all 45 of the world’s top 50 are in the 65-man field competing for a prize fund of $7.2million and winner’s cheque of $1.2million, with Rory McIlroy, Hideki Matsuyama, Jason Day, Henrik Stenson and Brooks Koepka the players to miss out.

Reigning champion Johnson is favourite to win a fifth World Golf Championship (WGC) title. Johnson’s victory last year came during a red hot stretch in which he won three consecutive tournaments, including the WGC-Match Play event, before his run was halted by a freak back injury on the eve of the US Masters.

The big-hitting American already has three top-10 finishes in four PGA Tour starts this season, including a January victory at Kapalua, and will tee off at Club de Golf Chapultepec with an eye on gaining some momentum ahead of the Masters which starts on April 5th.

Among the other top players in the field this week are world number two Jon Rahm, who finished third here a year ago, and reigning player of the year Justin Thomas.

Rose, who came within a whisker of winning the Masters last April where he fell in a playoff to Sergio Garcia, edged Johnson in Shanghai, and is vying to become only the third man in history to claim back-to-back WGC titles.

1 Georgia and Fiji in line to join Six Nations sides in eight-team tournament
2 Obafemi has final say as Southampton stall Man United’s run of wins
3 Malachy Clerkin: Sleep well Jack, you made us all happy
4 Andy Moran on moving on from a Mayo career that glowed golden to the end
5 Keith Duggan: Bubba Wallace tweet shows just how troubled Donald Trump’s mind is
Real news has value SUBSCRIBE