Flooding has seen second round of Zozo Championship in Tokyo postponed 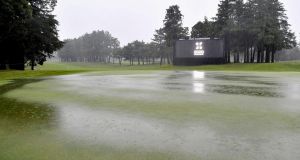 Tiger Woods’ hopes of building on his impressive opening 18 holes at the inaugural ZOZO Championship were put on hold after the second round was postponed because of heavy rain in Japan.

Officials made the decision due to poor forecasts throughout Friday, with up to five inches expected during the next 24 hours at Narashino Country Club.

Woods, attempting to join Sam Snead with a record 82 wins on the PGA Tour, is in a share of the lead with US Open champion Gary Woodland on six under and home favourite Hideki Matsuyama a shot behind following a 65.

Having started three over par after three holes, Woods played the remaining 15 in nine under par to card an impressive first-round 64.

However, because of forecasts of heavy rain throughout Friday, officials made the decision to instead start the second round on Saturday morning between 6.30am and 8.30am local time.

PGA Tour vice president of rules and competition Gary Young said: “The golf course has already taken on four tenths of an inch of rain, so it has actually reached the point of saturation and it’s become unplayable.

“With more rain in the forecast and three to five inches of rain for the day, we thought the right decision was to call play for the day,” Young said on the PGA Tour website.

England’s rugby team have also been impacted by the wet weather in Japan ahead of the World Cup semi-final against New Zealand on Saturday.

Eddie Jones’ squad were delayed by 10 minutes in their 30-mile journey from the team hotel in Tokyo Bay to International Stadium Yokohama for Friday’s scheduled captain’s run because of heavy rain causing traffic problems.

England assistant coach Neal Hatley revealed that although the rain is expected to clear, the travel logistics will be re-examined ahead of the clash against the All Blacks, which kicks off at 5pm local time.

Speaking after Thursday’s opening round, Woods had accepted playing on through the conditions would be a test at the Narashino Country Club.

“It’s going to be sloppy and tough for us,” Woods told the PGA Tour’s official website.

“It’s going to be a grind on the weekend. Hopefully I can keep it going.”