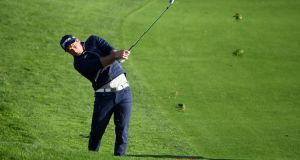 New Zealand’s Ryan Fox plays his second shot on the 14th hole during the first round of the Open de France at Le Golf National in Paris. Photograph: Ross Kinnaird/Getty Images

Three birdies in his closing five holes helped Ireland’s Gavin Moynihan to skip up the leaderboard in the first round of the French Open at Le Golf National in Paris on Thursday.

The 25-year-old was level par after 13 holes before gains on the fifth, sixth and eighth holes helped him finish with a three-under 68 and a share of 13th position.

South Africa’s George Coetzee and New Zealander Ryan Fox carded six-under-par 65s to share the lead as the European Tour returned to Le Golf National in Paris a year after the course hosted the Ryder Cup.

Making the most of good scoring conditions in the morning, Coetzee started with two birdies and picked up three more shots from the sixth hole to surge ahead as he reached the turn in 31.

The 33-year-old sank two more birdies on the back nine before dropping his only shot on the penultimate green.

Coetzee has four victories on the European Tour and finished runner-up at the Qatar Masters this season.

“It was almost perfect,” said Coetzee, who finished with his best opening round score of the year.

“I played really well. It’s nice to be in the mix again. It’s been kind of a hard, long year but it feels like the game is coming along nicely.”

Fox, son of former All Blacks outhalf Grant, carded four birdies in five holes on the front nine, and after offsetting a birdie on the 12th with his only bogey at the next, produced another solid putt to pick up a stroke on the 16th.

The World Super 6 champion had a great chance of taking the lead on his own but missed his birdie putt from eight feet on the final green.

“I played really solid today. This is a golf course that can kick you pretty quickly,” Fox said.

“I could have potentially grabbed a couple more on those last four, which is always a bonus, but very happy to walk away with a 65 around here.”

Home favourite Benjamin Herbert finished with a birdie on the last to sign for an impressive 66 and sit one shot off the lead alongside American Kurt Kitayama and Scot Richie Ramsay.

Paul Dunne never recovered from dropping five shots in two holes on his front nine after he followed a triple-bogey on the 15th with a double on 16th as he finished with a six-over 77.