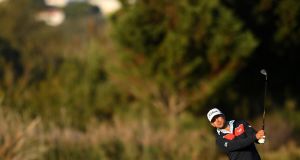 Louis de Jager of South Africa plays his third shot on the 12th hole during the first round of the Portugal Masters at the Dom Pedro Victoria Golf Course in Quarteiral. Photograph: Harry Trump/Getty Images

Paul Dunne and Gavin Moynihan have left themselves work to do to make the cut at the Portugal Masters in Vilamoura and put themselves in with a chance of earning the money required to keep their plauying rights for next season.

Dunne is presently 118th on the Race to Dubai standings, with only the top 117 earning full playing privileges for the 2019-2020 campaign, while Moynihan faces a much sterner task, as he presently lies 140th in the rankings.

Their immediate goal will be to make the weekend, with Dunne in 76th position after a level-par 71 that included four birdies that were traded off with a double-bogey six on the seventh hole and bogeys on the 18th and ninth after he started from the 10th.

Moynihan faces a tougher challenge after a three-over 74 that included four dropped shots and just a single birdie, at the par-five fifth.

Michael Hoey was the top Irish golfer in action after a one-under 70 that included three birdies in four holes on his front nine, while Ryder Cup captain Pádraig Harrington carded a two-over 73.

At the top of the leaderboard, South Africa’s Louis De Jager enjoys a two-shot lead having opened with an eight-under-par 63 at the Dom Pedro Victoria Golf Course.

De Jager registered eight birdies in his bogey-free round, including five in his first seven holes – the 32-year-old having started the week 123rd in the rankings.

Walters and Fisher – who produced the first 59 in European Tour history with his second round at this event last year – are 121st and 112th in the rankings respectively, while McLeod is 159th.

After shooting a 65 featuring seven birdies and a bogey on Thursday, Fisher said: “The best thing I can do is go out there and be clear about what I’m doing and not let my mind wander too much and think ‘what if’.

“It’s a week I like and a course I like. I’ll go out and give it my best and stay in the moment as much as I can and see what happens.

“I actually played really well today but it’s funny to think I had to be six shots better to do that [59] again. It was a great day. This course has given low scores over the years – anything is possible out there. It’s nice to go out there with a bit of expectation after that good round last year.”

A group of seven players are a further shot back, including a pair of Fisher’s compatriots – Matthew Southgate and David Horsey.

The others on five under are Italy’s Renato Paratore, South Korea’s Jeunghun Wang, South African duo Darren Fichardt and Brandon Stone and the USA’s Sihwan Kim.