Tiger Woods surges into lead in Japan after stunning 64 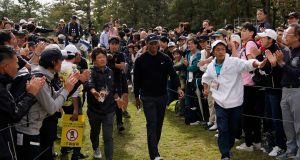 Tiger Woods walks to the eighth hole during the first round of the Zozo Championship at the Accordia Golf Narashino. Photo: Lee Jin-man/AP Photo

Tiger Woods produced a brilliant fightback to claim a share of the lead after the first round of the inaugural Zozo Championship in Japan.

Woods was three over par after three holes at Narashino Country Club, but played the remaining 15 holes in nine under par to card an opening 64, which was matched by US Open champion Gary Woodland, leaving both men tied for the lead at six under.

Home favourite Hideki Matsuyama is a shot off the lead following a 65, but world number two Rory McIlroy is eight strokes off the pace after struggling to a 72.

British Open champion Shane Lowry sits seven shots off the lead after an opening round of 71.

The Offalyman slipped to two over par through five holes after starting on the 10th with bogeys at the 12th and 14th but managed to settle the ship with a run of pars before picking up his only birdie of the day at the eighth – his 17th – to finish at one over par.

Graeme McDowell props up the field at 11 over after a disastrous 81 which included two double bogeys and a triple bogey in his final seven holes.

McIlroy was one under par after 10 holes but bogeyed the 11th, double-bogeyed the next and dropped another shot on the 16th before ending the day with a birdie on the 18th.

Woods began his round on the back nine and got off to a nightmare start as he pulled his drive on the 10th into the water to make the first of three consecutive bogeys.

The 15-time major winner steadied the ship with a par on the 13th before posting a hat-trick of birdies from the 14th and picked up another shot on the 18th to reach the turn in one under.

Woods made his second hat-trick of birdies from the third and further birdies on the seventh and ninth completed an inward nine of 29 to boost his chances of claiming the 82nd PGA Tour title of his career, equalling the record of Sam Snead.

“It’s always nice to get off to a quick start and then figure it out from there, but that start I got off to wasn’t very good.

“After the start the ball-striking was better, the putting was really good. It was one of the stranger rounds I’ve experienced in a while. It seems like every putt I made, other than the one at seven, was left to right. It was crazy.”

Bad weather is forecast for the second round on Friday and Woods is anticipating some disruption to play for the remainder of the first PGA Tour event to be staged in Japan.

“It’s going to be sloppy and tough for us tomorrow morning before the storm gets in and I think we’re probably going to get a little wet, and then it’s going to be a grind on the weekend,” the 43-year-old added.

“It’s going to be a lot of golf on the weekend for all of us and probably be close to 54 holes or so for some of the guys on the weekend. It will be a long couple of days for us.”

1 Saudi Arabia-funded takeover of Newcastle United in serious doubt
2 Gerry Thornley: Home and away Six Nations could be its ruination
3 Net-tricks: How John McEnroe became the inner voice of a 15-year-old girl
4 The story of Mario Gotze: a rare illness and unfulfilled potential
5 Coming fourth in the Olympics didn’t change this fearless quartet, time did
Real news has value SUBSCRIBE