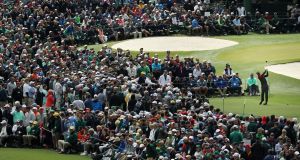 Tiger Woods on the third tee during his final round at Augusta National. For the first time since the Open Championship of 2014, Woods successfully managed to complete all four rounds in a Major. Photograph: Patrick Smith/Getty Images

The prodigal son had a wry grin, his return to Augusta National at least providing Tiger Woods with affirmation that his body and mind still had some way to go before he could add to his haul of 14 Major titles; but, at least, he was back, no longer away like a lost soul wandering aimlessly.

In the run-up to this 82nd Masters, Woods had likened his recovery from lower spinal fusion as akin to a miracle. If, in fact, the advances in science – and the genius of his surgeon – were the primary factor in his ability to walk and play golf again, the player’s thought process has shifted on. For the first time since the Open Championship of 2014, Woods successfully managed to complete all four rounds in a Major. That’s progress.

Woods – who signed off with a closing 69 for 289, one-over-par – might never have got into the heat of battle, finishing his interest in the tournament long before those with a green jacket in their grasp even entered Amen Corner, but there was sufficient encouragement to believe that he will once again be a factor in the Majors going forward.

“I think things are progressing, and it was a little bit disappointing I didn’t hit my irons as well as I needed to for this particular week. You miss it just a touch here, it gets magnified. And I just didn’t do a good enough job this week in that regard. But overall I’m five or six tournaments into it, to be able to compete out here and to score like I did, it feels good,” said Woods, who intends to take a break before resuming tournament play, most likely at the Wells Fargo Championship at Quail Hollow next month.

A 14-time Major champion through his career, the last of which came at the US Open at Torrey Pines back in 2008, Woods arrived here at Augusta National with a renewed vigour and with a healthy body. Yet, the expectations proved to be greater than the delivery. From the stage last Tuesday in practice, where he had two eagles in his round, and a giddiness permeated through the galleries, that promise failed to find any substance once the actual heat of battle came.

At least he reserved the best until last. After failing to break par in his opening three rounds – 73-75-72 – there was at least encouragement, and the two crystal glasses for an eagle at 15, to take with him as he surveys the road ahead.

Looking backwards, first, he complained about his irons at this Masters. “Awful,” is the word he used to describe how he hit them. And, then, he rubbished his putter, which was disobedient even in finally finishing with that 69 which included two three-putts. “I didn’t put it together when I needed to for the entire week,” he said with the sort of philosophical outlook you’d expect from someone who had wondered only six months ago if he’d ever compete again.

At least he was back at Augusta National with golf clubs in hand, rather than merely to feast at the Champions dinner. “For a couple of years I’ve just been coming here just to eat, and now to be able to play this golf course and to be able to tee it up and play in the Masters; this is one of the greatest walks in all of golf and I had missed it for the last couple of years. I hadn’t been able to play in it. So now I’m glad I’m competing in this tournament, and to face the challenges out there. I missed it, I really did. I missed competing against these guys.

“It’s disappointing that I didn’t hit the ball well enough. But to be able to just be out here competing again, if you had said that last year at this particular time, I would have said you’re crazy. I had a hard time just sitting or walking. So now to be able to play and compete and hit the ball the way I did, that’s quite a big change from last year.”

Woods has made big strides to get to the point where he can play again. Now, it is back to the gym; back to making the body stronger. “Generally after this tournament I put away the clubs for a while. I usually take three to four weeks off, throughout my entire career, and usually the clubs are put in the closet and I just kind of get away for a while. The run up to this event [was] pretty hard and pretty gruelling. I pushed myself pretty hard to get ready. And I peaked at it four times over the course of my career and it’s tiring.”

Time for a rest, but he isn’t wandering away too far this time. He’ll be back. Soon.