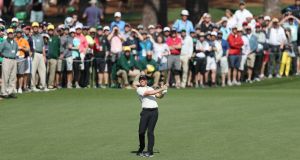 Rory McIlroy hits from the fairway on the second hole during the second round of the 2018 US Masters. Photo: Andrew Gombert/EPA

Sometimes there are things outside of your control. Rory McIlroy knows this. On the fourth green, as if he didn’t have enough problems of his own to consider, the Northern Irishman stood by his ball which had overshot the Par 3 to finish on a wicked upslope. The challenge would be to try and control the chip shot to the devilishly positioned flag, so that it wouldn’t run away like a scalded cat. Much food for thought.

As McIlroy contemplated his options, his old pal Jon Rahm had his own issues to figure out. The Spaniard’s tee shot had come up short into a deep, cavernous bunker; and when Rahm eventually played out, the ball squirted through the green and finished up not far from McIlroy. If the arrival of the ball was a distraction to his thoughts, what followed was more so.

We can take it Rahm wasn’t too happy with his effort. His actions spoke louder than any words. Firstly, he slammed his sand wedge into the bunker’s whiter-than-white sand. Then, he flung the club away. After getting out of the bunker, Ramh’s next action was to kick his prone golf bag. Then, he walked over to where his club had come to rest, picked it up . . . . and threw it back towards his bag.

Let’s just put it down to a Latin temperament; or a case of wearing his feeling s on his sleeve, or what you see is what you get. You get the drift.

This was a day to test the patience of a saint, in fairness. The wind swirled, the azaleas danced, and the old lady ensured players’ and caddies’ second-guessed themselves on club selection and on shot-making options on a difficult second round of the Masters.

“The wind’s so tricky,” he would concede. “The wind should have been south-southwest on every single hole and it is coming from a different direction. With the wind here, I wait until I feel where the wind should be and (then) I hit my shot.”

Going out, McIlroy had stressed the importance of patience as a key strategy in his plan to maintain his challenge. If Rahm’s antics were any distraction to him, McIlroy didn’t show it. He kept in his own world, although his difficult chip led to a two-putt bogey on the hole.

It was a second bogey in the opening four holes for McIlroy, who’d arrived onto the practice putting green for his tee time with the clock running down. In fact, Rahm and Adam Scott, the other two members of the group, had been practicing putts for some 20 minutes before McIlroy made a brief appearance: just seven putts, four from long range, three close up, and with that he was on his way to the tee box. Short, and sweet.

McIlroy’s second round started with a huge drive. Only trouble was, it was tweaked slightly left and finished in the pine straw, from where he conjured up a lovely approach shot. It didn’t end well, though, as his first putt from 30 feet was under-hit and caught the slope, leaving a 12-footer for par which refused to drop. But he got his first birdie on the Par 5 second when, after driving into a fairway bunker, his recovery went down the right and the approach finished 25 feet above the hole. This time, the putter obeyed. It was his only birdie of the front nine.

In fact, that game of patience that McIlroy had identified proved to be a required commodity. With just the one birdie and three bogeys – on one, four and six – on the front nine, McIlroy was forced to grind it out. Par after par from the sixth, six pars in succession as birdie putts refused to fall into the tin cup, until a breakthrough came on the Par 5 13th. Then, a 12-footer on the 14th to make it back-to-back birdies. All the buses started coming at once.

Except, the bus didn’t arrive on the Par 5 15th – a hole which he’d targeted – where, after a perfect drive, McIlroy’s approach overshot the green and bounded towards the lake at the back. “Sit! Sit!” pleaded McIlroy, and it did, but only after some anxious moments as it skipped down the slope before coming to a halt. His recovery pitch came up short of the putting surface, and he walked away with par.

Indeed, par would be his friend for the remaining walk home as birdie chances, especially on the 18th evaded him. On the closing hole, with a 10-footer down the hill, the putt slid by the hole. And, for the first time all day, McIlroy reacted to a miss, but only with a gentle raise of the putter from one hand to the other to betray any exasperation. “I felt like I left a couple (of birdies) out there on 17 and 18, just hit the putt on the high side . . . . and it stayed there,” he later explained.

For the most part, just as he’d planned, McIlroy’s round was based around patience.

And, in signing for a 71 to add to his opening 69 to reach the midway stage on four-under 140, McIlroy had achieved his objective. The time has yet to come for when he might have to sit down for design a menu for the Champion’s dinner, but it was another step in the right direction as he got into the mix.

The zen-like composure, the calmness of his round, with legendary jockey AP McCoy among those who followed his every move, could yet prove to be as important an asset as any of the clubs in his bag. As important as the driver, or the putter. Any of them.