Amen Corner, where Masters prayers are answered and ignored 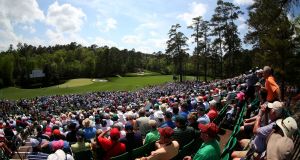 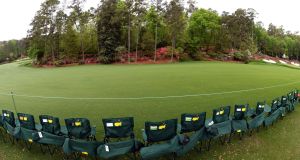 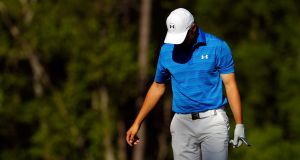 Jordan Spieth reacts after hitting his tee shot into the water on the 12th hole during the final round of the 2016 Masters at Augusta National Golf Club. Photograph: Kevin C Cox/Getty Images

Like a holy pilgrimage they gather in Amen Corner for one week every year to worship at golf’s grand altar tucked away in the farthest corner of the Cathedral of Pines.

Augusta National does not embrace or shy away from the religious references but make no mistake, this breathtaking piece of golfing real estate, an iconic stretch featuring holes 11, 12 and 13, is both Lourdes and Mecca for golf fans, where US Masters prayers are sometimes answered but often ignored.

“I wasn’t allowed to come here until I was 12-years-old and my father was sure I understood the significance of being here,” Jack Nichols of Washington, DC said as he and sister-in-law Karen Nichols settled into a third row folding seat overlooking the 11th green and 12th tee box.

“Our family has had tickets since 1972 and I have been coming since 1983 but I had to know my manners and the history and players of the Masters.

“We come to this spot at least once every year that we come. This place is special.”

It was the great American golf writer Herbert Warren Wind, searching for a way to describe the trio of holes, who coined the name Amen Corner in 1958.

Wind would later reveal the moniker came from the title of a jazz album he had liked called Shouting in that Amen Corner, and fans have been roaring there ever since.

Stroll around Amen Corner in the early dawn and it is a place so serene it is as if it were the inspiration for a Claude Monet landscape.

Take that same walk on any afternoon during the four rounds of the Masters and Amen Corner has become a seething cauldron of devilish holes that more often than not figure in the outcome of who will wear the coveted Green Jacket.

Masters history is full of ‘Amen’ moments penned by some of golf’s legendary figures like Byron Nelson, who surged through the turn in 1937 with a birdie and eagle at number 12 and 13 en route to the claiming the year’s first Major.

More recently Jordan Spieth discovered the dangers that lurk at Amen Corner as he watched his 2016 Masters title defence sink in the waters of Rae’s Creek that guard the 12th green.

Spieth had stormed four strokes in front with eight holes to play on Sunday and victory looked seemingly assured before he bogeyed the 11th and ran up a nightmare seven at the par-three 12th handing the Green Jacket to Englishman Danny Willett.

“Once you win here, you have an advantage over anybody who hasn’t won here.”

It is that type of compelling drama that can pull hundreds of golf fans out of their beds in the early morning hours and to Augusta National where they wait patiently for hours in the chill until the gates open at 8am.

Amen Corner veterans will tell you if you want one of the really prime spots your point of entry has to be the back gate, giving you a distinct edge over those funneling through the main entrance.

Even then you might find the very best positions already reserved by caddies or members who have set up a few chairs for family and friends.

Then there are the increasing number of “corporate boxes” where enterprising hospitality companies hire helpers, load them up with folding chairs and send them off early in the morning to scoop prime places for well-heeled clients.

Nichols says he has heard kids are paid $100 if they can get their folding chairs in the front row, $75 for the second and $50 for the third before leaving the course and handing over the badges.

As the sun crept up over the towering Georgia pines on Friday, green Masters folding chairs were already carefully lined up across all of Amen Corner five to six rows deep.

It was just after 8am and all the very best spots to view the holes named Dogwood, Golden Bell and Azalea were gone.

“Yep, we’re some of those idiots who get up at 4am,” admitted Karen Nichols. “But it is kind of fun, you see a lot of the same people every year, it is like a reunion.”

For those who take part, the dash to Amen Corner is compared to Spain’s famous running of the bulls, except there is no running allowed at Augusta National.

Instead there is this funny scene of patrons race walking to their goal although occasionally someone will try to get an advantage.

“I remember once a guy thought he was in the clear and he starts running and then an Augusta member spotted him,” recalled Jack Nichols with a smile. “He had him stopped and took his badge away.

“The guy dropped to his knees and started begging . . . a grown man crying in Amen Corner.”