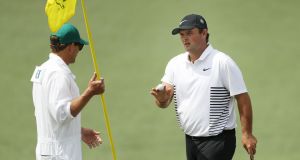 Patrick Reed waves on the second hole alongside caddie Kessler Karain during the second round of the 2018 US Masters at Augusta National Golf Club. Photo: Patrick Smith/Getty Images

Its angelic appearance deceived, as Augusta National – flowers gloriously blooming, and with the sun shining to accentuate the colour of each and every blossom on the dogwoods – demonstrated rather more evil intent as competitors in the second round of this 82nd edition of the US Masters were thrust into a battle for survival.

Even Jordan Spieth, a favoured son, struggled; having claimed the first round lead, his opening gambit of the second phase of the journey was to run up a double-bogey on his first hole. Reality had bitten, and as he grinded his way to a hard-earned 74 for 140 at the midpoint, his plight only served to underline the challenge of earning an iconic Green Jacket, the reward of the eventual champion.

Patience, indeed, was the name of the game. And Rory McIlroy – the one player in the field who is able to complete a career Grand Slam with a victory here – showed maturity to fashion a second successive sub-par round. In adding a 71 to his opening round 69, the 28-year-old Northern Irishman reached the midpoint on the same mark as Spieth.

McIlroy’s pursuit of Spieth yielded immediate rewards, one of his main rivals reeled back in, although Patrick Reed, immune from the travails of others and his putter on fire, moved into the lead and would be the one everyone has in their sights going into the weekend.

The American racked up six birdies on his front nine before picking up three more on the way in, blighted only by three bogeys on his way to a scintillating round of 66, nine under par, to lead by two from Marc Leishman with Henrik Stenson a further two shots behind the Australian.

Dustin Johnson also made a significant move. Johnson, the world number one, missed last year’s championship after injuring his back in a fall down stairs at his rented home and his quest for some redemption was aided by a second round 68, that moved him to three-under 141, into the heat of the action.

And Tiger Woods – mixing rough with smooth, a double-bogey six on the fifth where his approach shot discovered bushes rarely ventured into by anyone, but finding birdies on the two Par 5s on the back nine – ensured he safely made the midway cut, with a 75 for 148 (four-over).

It’s going to get tougher over the final two rounds, a a weather front – with a forecast of rain throughout most of Saturday – set to hit the area.

McIlroy had the look of a satisfied man, and rightly so. “It makes it all the more pleasing that I’m up there near the lead, it’s such a hard golf course to chase on. You start to go for pins and you start chasing it, that’s when you can bring in some trouble and make some mistakes. Happy with the position I’m in, and whatever weather comes our way, I feel like I’ll be able to handle it and keep myself near the top of the leaderboard, and it’s going to be an exciting weekend.”

In many ways, McIlroy couldn’t have planned it any better in manoeuvring into a challenging position in his quest for that one missing Major link. With the US Open, British Open and US PGA wins already on his CV, McIlroy is seeking to join the elite group of career Grand Slam champions. Only five have managed it, the last of those Woods who claimed his first Slam in 2000.

“I never have expectations of where I’m going to be on a leaderboard. I just want to go out and play well. I guess how I felt out on the golf course and the shots I’ve hit and how I felt in general, I would have taken that. But yeah, I mean, being up there around the lead going into the weekend, it’s a good position to be in. But I think I’m happier with how I’ve felt and how I’ve handled certain things and how my thought process has been. That’s been a pleasing thing,” said McIlroy.

“I think whenever I first came out here on tour, I thought all these guys birdied every hole and you just had to hit unbelievable shot after unbelievable shot and hole the putt afterwards. It’s not quite like that. Golf is a game of making your misses not that bad and taking advantage of your good shots. So far this week, I’ve been able to do that.”

On a sunny day, the wind – swirling as it did through the towering cathedral pines, branches creaking and pine needles tumbling – became a nuisance. To such an extent that play slowed down (taking five hours 40 minutes to complete rounds!), as players deliberated with caddies over club selection, and a number of groups were put on the clock; although none were penalised by the sanction of being docked penalty strokes.

The wind wasn’t the only factor, as tough pin placements – some totally new – contributed too. As Ian Poulter put it, “I’ve got all the pins in my books from, I have four years worth in my book and I haven’t seen it in those (before) . . . . they’re clever in that way because just one yard out on some of the greens can give you a different break. So you just have to be aware of that and you have to know your pins, you have to know your lines, so, yeah, I mean that was a long-winded version (of saying), yes, it’s hard!”

Even seasoned players were reduced to foraging in the bushes for sustenance. Phil Mickelson was one of them, as the three-time Masters champion suffered a triple bogey seven on the ninth to put a major speed-bump in his journey towards a possible fourth title. Lefty would sign for a 79 (for 149) that survived the cut but which ensured an early third round tee-time, with much ground to make up.