Rory McIlroy says he has learned from 2011, when he gave up a four-shot lead on the last day of The Masters, ahead of a Sunday showdown with overnight leader Patrick Reed. Video: Reuters 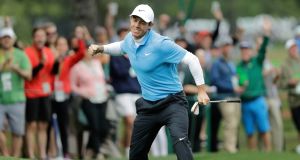 Rory McIlroy reacts after his eagle on the eighth hole during the third round at the 2018 US Masters. Photo: David J. Phillip/AP Photo

Golfing immortality lies within touching distance for Rory McIlroy as he heads into the final round of the Masters here at Augusta National Golf Club seeking to win the Green Jacket and also complete the career Grand Slam, but the 28-year-old Northern Irishman – trailing 54-hole leader Patrick Reed by three strokes – doesn’t intend on turning it into a head-to-head duel.

With history from their Ryder Cup clash two years at Hazeltine, when Reed emerged victor amid an amount of finger-pointing from both players, McIlroy heads into Sunday as the chief pursuer of the flamboyant Reed, a player aiming to win his first Major title.

Not that there will be much chit-chat going on between the pair. “I can’t imagine there’s going to be much chat out there. Not that I have anything against Patrick. We’ve actually got quite a good relationship, but at the end of the day it’s business and we’re both trying to do something special,” said McIlroy.

With the dynamics changing from a regular tournament final round when a Major is on the line, McIlroy explained: “There’s probably less chat, you’re trying to concentrate on what you are doing. There may be a little more dialogue with your caddie trying to stay relaxed or stay loose.” Indeed, McIlroy recalled that he had a good “chuckle” with his bagman Harry Diamond walking down the seventh hole of Saturday’s third round when word filtered through that Manchester United had beaten Manchester City.

It was in 2011 that McIlroy went into the final round of the Masters with a four-stroke lead only to have a meltdown, and he said: “I’ve been waiting for this chance, to be honest. I always have said that, you know, 2011 was a huge turning point in my career. It was the day that I realised I wasn’t ready to win Major championships, and I needed to reflect on that and realise what I needed to do differently.

“But now I am ready. I learned a lot from it. I’m happy to be in the final group. Obviously I’m not in the lead like I was going into that day, so I probably don’t have as much pressure. I don’t have to protect anything. I can go out and sort of free-wheel , which is a great position to be in. I wish I was a little closer to the lead or leading, but I’m in the final group and I’ve shot 65 on moving day at the Masters. It’s all I can ask for.”

McIlroy shot a third round 65 for an 11-under-par total of 202, taking two strokes off the original deficit on Reed. “I rode my luck a little bit out there.... the chip-in on the eighth hole (for eagle) finding my ball in the azaleas (on 13),” admitted McIlroy. Yet, he made the most of being in the “sea of pink”, as he put it, at the Par 5 13th where he played a recovery shot from out of the azaleas to salvage a par.

“I was lucky just to see the ball, and I had a stance azaleas are actually pretty thin down below. They look pretty thick on top, but down below they are actually not too bad. I could take a stance and just sort of pick the club straight up and get it back down on top of it and just trundle it out through the pine straw and back on to the grass,” explained McIlroy, who then finished with birdies on the 15th and 18th to post his mark.

And of considering it a shootout with Reed, McIlroy was adamant such was not the case: “It’s definitely not a two-horse race at this point. There’s a lot more guys I’ll obviously know what Patrick Reed is doing, but apart from that, I’m going to set myself a target, try to get to that, and hopefully it’s enough.”

Reed became the first player since Lee Westwood in 2010 to shoot scores in the 60s for the first three rounds. The Texan – who attended Augusta State in his college days – included three eagles in a round of 67 for 202, which gave him a three shot lead over McIlroy with Rickie Fowler five adrift and Jon Rahm a further stroke back.

Reed might never have won a Major but he has shown great resolve in his Ryder Cup matches and is most certainly not short on confidence. . “I’m not out there to play Rory. I’m out there to play the golf course.I’m just going to do my thing and stick to my game plan and go out and enjoy my Sunday,” said Reed, who – ala Tiger Woods – wears red shirt and black trousers in the final round, having been inspired by Woods growing up.

McIlroy has his own personal awareness of knowing that a three shot deficit can be overcome. He was a four strokes leader in 2011 going into the final round when Charl Schwartzel emerged with the title, while Nick Faldo trailed Greg Norman by six strokes in 1996 when the Englishman won his third green jacket.