Tiger Woods: ‘I’m right where I can win a golf tournament’ 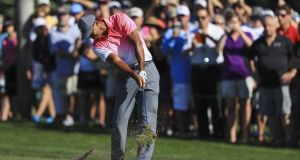 Tiger Woods plays a shot on the 10th fairway during the second round of the Honda Classic at PGA National Resort and Spa in Palm Beach Gardens, Florida. Photo: Sam Greenwood/Getty Images

For Tiger Woods to remain part of the Honda Classic equation after the cut is notable enough. For the 14-times major champion to be in the top 10, as he was for a spell on Friday, was the stuff of Florida fairytale.

There was to be no dream scenario, as befitting the encounters with harsh reality he has become accustomed to just when progress appears rapid. Woods has encountered far worse in recent times than a bite from the Bear Trap – PGA National’s infamous set of three holes from the 15th – but what transpired there stung nonetheless.

Woods took to the windswept 15th tee at one under for his round and in a share of ninth, a slightly remarkable scenario given his lack of competitive action and the difficulties associated with a venue where the cut fell at plus five. Trouble beckoned, including for energised galleries, as the 42-year-old carved a horrible iron shot into alligator ridden waters.

A Woods double bogey was compounded by a three-putt and dropped shot at the 16th. A terrific tee shot into the penultimate hole – like the 15th, a dicey par-three – preceded crowd chants of “Tiger, Tiger”. He duly holed out from 12ft for a superb birdie. Packed stands roared once more. One is left to wonder what on earth will transpire if this fallen genius actually wins again. Typically he believes he can do that very thing on Sunday.

Woods was to sign for a 71, one over par, which leaves him four from the Honda Classic lead. Luke List and Jamie Lovemark are tied at the summit of the leaderboard, with England’s Tommy Fleetwood among four players on minus two.

“I’m four back so I’m right in the ball game,” said a bullish Woods, who for now shares 14th. “I really played well today. I played well all day.

“I feel like I’m right there. I’m right where I can win a golf tournament. Four back on this golf course with 36 holes to go? Anybody can win this golf tournament right now. It’s wide open.” As if to emphasise that, in stroke terms Woods is as close to the bottom of the remaining field as he is to the top.

Earlier Woods had produced his finest concerted spell of golf for years as fairways were found with ease and putts rolled in a manner which belied treacherous greens. At the 10th Woods battered a drive 361 yards into prime position.

“I’m getting there,” Woods added. “I feel like I’ve made some nice tweaks. I’m hitting the ball flush and on top of that I’m really controlling the trajectory. Especially here with the wind blowing this hard I felt that was very important; it was also very comforting because I live here and I practice here and it’s always blowing like this.”

Rory McIlroy had a second 72 in as many days, thereby surviving for the weekend. The Northern Irishman agreed the set-up here is more worthy of Open Championship build-up than for the Masters, which is little over a month away. McIlroy’s Friday score included a triple-bogey six at the 17th meaning, in combination with the 18th on day one, he has conceded five strokes in two championship holes.

“It is sort of Open conditions, US Open scoring,” McIlroy said. “Pretty much the preparation for everything but what we want it to be. I guess the greens are getting a little fast, so that’s one thing. It seems like it’s been quite blustery the last couple of years at Augusta, anyway. But yeah, it’s probably the furthest thing from Augusta right now around here.

“There’s nothing I’ve done over the last two days where I can say, ‘That will help at Augusta.’”