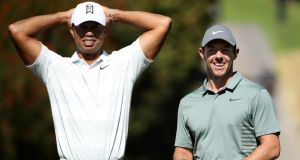 Tiger Woods will serve as one of the vice-captains on the US Ryder Cup squad that will try to snap a 25-year drought on European soil later this year, Jim Furyk said on Tuesday.

Furyk, who will serve as captain when holders United States battle Europe in September at the Golf National on the outskirts of Paris, also announced Steve Stricker as a vice-captain.

“To win in Paris will be a great challenge, and to have Steve and Tiger share in the journey is important for me and for American golf,” said Furyk, who made the announcement from the PGA of America headquarters in Palm Beach Gardens, Florida.

“The deep appreciation they both have for competition, the concept of team, and the Ryder Cup is infectious. Their knowledge and experience will be an invaluable resource in our effort to retain the Ryder Cup.”

Woods, who this week will make his third start of the PGA Tour season after a year-long absence during which he had back surgery, has competed in seven Ryder Cups and first served as a vice-captain at Hazeltine in 2016.

This year’s Ryder Cup, to be played from September 28th-30th, will mark Stricker’s third stint as a vice-captain, having served at Gleneagles in 2014 and in the 2016 US victory at Hazeltine.

The United States won the biennial matchplay event at home in 2016, marking their first triumph since 2008, but they have not celebrated on European soil since a 15-13 victory at The Belfry in 1993.