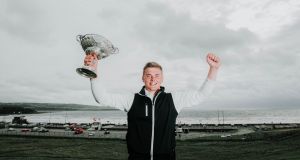 Lahinch is no stranger to great feats of derring-do so it’s entirely realistic to believe Mallow’s James Sugrue can become the first player for 55 years to retain the South of Ireland Championship this week.

The 21-year-old defending champion tees it up in the first strokeplay qualifying round today hoping to follow in the footsteps of Killarney’s Michael Guerin, who famously completed a hat-trick of victories with a 2&1 win over David Sheahan in 1963.

Amateur golf has changed utterly since those days and while many will argue about the strength in depth of one era versus another, the holder knows that, given the vagaries of matchplay golf, he will have to produce his very best golf to top an elite field two years running.

He believes he’s a much-improved player thanks to hard work with coach Michael Collins and he showed as much last month when he carded an immaculate, eight-under par 64 to win regional qualifying for the British Open at County Louth.

He couldn’t quite reproduce that kind of form in final qualifying. But, having watched the action unfold on the sun-scorched fairways of Carnoustie over the weekend, he saw enough of Tiger Woods’ tactical approach to know what he has to do at Lahinch.

“All the players that finished well were the ones that were hitting it straight and hitting a lot of long irons,” Sugrue said of last week’s Major test. “I think if you take a similar game plan to Tiger Woods, you won’t be far away at Lahinch.

“I’m looking forward to it. It should be a good week. It was raining and quite windy last year. I’m told the course is fairly brown at this stage so the conditions will be completely different to last year.”

Sugrue plans to avail of his two-iron as often as possible in the 117th edition of Pierse Motors Volkswagen-sponsored classic.

And if he wins, he can take a giant step towards winning a place in the Irish team for the Home Internationals at Royal Dornoch next month as “the South” is the penultimate event in the Bridgestone Order of Merit series which will see the top two points winners after next month’s AIG Irish Close earn a coveted spot on the Ireland team.

Sugrue is sixth in the list but knows a win could potentially see him leapfrog leader Robin Dawson, who is on duty from Great Britain and Ireland with Portmarnock’s Conor Purcell and Kinsale’s John Murphy in the St Andrews Trophy match against the Continent of Europe in Finland.

“Hopefully I can make the Home Internationals,” Sugrue said. “That’s the plan.”

Competition will be red-hot on the Clare coast with Castle’s Alex Gleeson, West of Ireland champion Robert Brazill from Naas, Kilkenny’s Mark Power and Waterford’s Eanna Griffin all ranked ahead of the Mallow man in the points race and gunning for the coveted title.

Despite the absence of Great Britain and Ireland players Dawson, Purcell and Murphy, there is a strong field in action with Galway’s Ronan Mullarney, 2016 runner-up Rowan Lester from Hermitage, Douglas’ Peter O’Keeffe and Dundalk’s Caolan Rafferty also vying to make the 64 qualifiers for Friday’s matchplay stages.