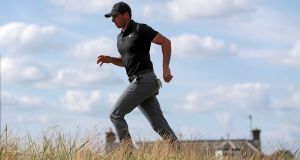 Rory McIlroy runs up the 18th hole during the first round of the 2018 British Open at Carnoustie. Photo: David Davies/PA Wire

Rory McIlroy adopted the virtue of patience to go with an aggressive game plan, a twin strategy that combined to work a treat.

The Northern Irishman’s opening round of 69, two-under-par, in this 147th British Open over the parched links ensured his quest for a fifth career Major title was given sustenance, with the prospect of greater nourishment when the driver – as he believes it will – truly plays its part.

Normally the most accomplished weapon in his bag, McIlroy’s TaylorMade driver took him to some strange places amid the hillocks of this esteemed course in Angus.

Yet, the prodigious length of his drives, if sometimes wayward, mostly enabled him to clear the danger of bunkers and gorse to provide an opportunity to use shorter irons on approaches to firm greens.

“I’m convinced that that’s the way that I should play it. It’s not going to be for everyone, but it worked out pretty well [for me],” said McIlroy of a gung-ho approach that left him inside the top-10 three shots adrift of first round leader Kevin Kisner, who required just 22 putts in signing for a five-under-par 66.

On a dry day on the scorched links, some tough pin placements tested the patience of many and Jordan Spieth, the defending champion, admitted to suffering what he termed a “brain fart” moment which caused him to play the wrong shot to the wrong place in running up a double-bogey on the 15th en route to a 72. It remains to be seen how damaging that lack of concentration proves to be in his defence of the Claret Jug.

Spieth was not alone in suffering indignation, as US Open champion Brooks Koepka took three attempts to escape a greenside bunker on the eighth and Sergio Garcia’s drive on the 10th bounded so far that it entered the Barry Burn.

The Spaniard sought to rescue matters by clambering into the drain to at least play the ball back out onto dry land, but he still bogeyed the hole on his way to a confidence-sapping 75.

Others struggled too. Dustin Johnson succumbed to a 76 that tied the worse opening round in the championship by a sitting World Number One, an unwanted distinction last set by Seve Ballesteros back in 1986; while Pádraig Harrington – champion here in 2007 – was one-under through eight holes only to wilt and eventually sign for a 76.

“Disappointing,” was the Dubliner’s synopsis, his race over before it ever got going. “It was a war of attrition most of the time.”

Tiger Woods, though, battled gamely. Playing in the championship for the first time since 2015, Woods reached the turn in a bogey-free two-under but, with the wind shifting direction for those late starters, and the greens getting ever bumpier, he leaked shots coming in only to steady the ship and grind out a par-par-par finish for a level par 71.

McIlroy’s resolve – and patience – was also impressive. If there was any hint of frustration with lip-outs or putts grazing the hole yet stubbornly refusing to drop, the 29-year-old kept his calm and trusted his quicker routine of lining up, standing over the putt and letting the blade do its work.

His reward came with a couple of long putts when it mattered on the homeward journey, a 20-footer for birdie on the 12th and an equally important 20-footer to save par on the 16th.

There remained a full belief too in his strategy to play aggressively. His caddie Harry Diamond had travelled early to Carnoustie last week to assess the course, and especially the rough, and determined McIlroy’s best policy would be to overpower the links.

“He told me, ‘the guys that can carry their drivers over 300 [yards] can take all the fairway bunkers out of play’.” The player, on arrival, agreed.

So it was that, even though he had the honour on the third hole of the first round, McIlroy stood his ground and waited. He let Marc Leishman and Thorbjorn Olesen hit irons off the tee, then bided his time so that he could launch a driver when the green ahead cleared.

“I’m waiting for about 15 minutes on the tee to let the group in front finish and I’ve got driver in my hand and I’m like, ‘I’d better hit a good drive here’. I got it over the back of the green but to get that up-and-down for birdie, it was sort of validation, like, ‘yes, this is the way to do it’. It was a nice little moment, like a personal victory.”

McIlroy – with the word “NASTY” blended into the soles of his shoe, a reference to the “Car-nasty” tag attributed to the course in past championships – had a rather nice experience, with the plan to stay on playing aggressively.

“I definitely think that’s the worst I’m going to drive it this week . . . hopefully I can hit a few more fairways, but I will adopt the same strategy.”

Follow all of the second round action on our liveblog from 7.30am on Friday.