Carefree Rory McIlroy close to where he needs to be 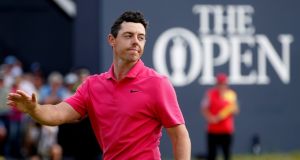 Rory McIlroy will return to action at the WGC Bridgestone in Akron. Photograph: Andrew Yates/Reuters

Rory McIlroy departed Carnoustie licking his lips in anticipation, and with good reason. Although victory evaded him in the 147th British Open, so many facets of his game came together to ensure the coming weeks - a return to an old stomping ground at the WGC-Bridgestone Invitational, the US PGA and, further down the line, the Ryder Cup - will have a great sense of expectancy.

Of all things, it was an improvement with putter in hand that was noticeable. Okay, he missed a few short putts inside 10-feet and even a couple from four-feet over the championship, but he also holed his fair share of putts over 10 feet. As he put it himself, these things “balance out.”

Yet, the difference between McIlroy’s putting at Carnoustie and his putting in the DDF Irish Open was a nine stroke improvement with that most essential implement of all in his hands. Indeed, in reverting to more of a “feel” pre-shot routine, rather than a so-called “robotic” method, McIlroy got results: once he had lined-up a putt, he was quickly standing over the ball and hitting it without any further thought.

And the Northern Irishman - who chased hard for a fifth career Major title, his last victory having come in the 2014 US PGA Championship at Valhalla - made a valid comparison with Tiger Woods’s own quest for another championship crown. “It’s great to have him back . . . but this was his first taste of Major championship drama for a while. Even though he has won 14, you have to learn how to get back. I’m relearning. I feel like I’ve won quite a few recently, but you still have to relearn to deal with it.”

McIlroy’s last chance of winning a Major this season rests with next month’s US PGA at Bellerive Country Club in St Louis, Missouri (where he will be one of four Irish players in the field along with Pádraig Harrington, Paul Dunne and Shane Lowry). McIlroy, though, will be the only Irish player competing in the Bridgestone Invitational at Akron next week where - like Woods - he has previously enjoyed success.

That Akron tournament will give Mcilroy another chance to assess exactly where his putting is. But it’s been a while since McIlroy has seemed so much like his old self on a golf course. Even more so than when he won the Arnold Palmer Invitational earlier this season, for that win came a little out of the blue. At Carnoustie, there was more of that “carefree” approach that he has been searching for and he is very, very close to where he wants - and needs - to be.

“I’ll look back and be very encouraged about what I’ve done and the golf that I played. I feel like it will stand to me in good stead for what is coming up,” said McIlroy, who is on a week off before resuming tournament play at Akron and then moving on to St Louis for what will be the last PGA to be held in August. From next year, it moves to a new date in the schedule in May when it will be held at Bethpage in New York.

Shane Lowry will be looking to bounce back from the disappointment at missing out on yet another cut at the British Open. Having parted ways mid-championship with his long-time caddie Dermot Byrne, Lowry is set to have his brother, Alan, on the bag for this week’s Canadian Open and next week’s Barracuda tournament in Reno with the aim to have a replacement ready in time for the PGA.

Lowry is one of four Irish players in the field at the Canadian Open, as he seeks to earn sufficient FedEx Cup points to retain his card. Padraig Harrington and Graeme McDowell - also fighting to keep their PGA Tour cards, although Harrington has the fallback of using his career money exemption - and Séamus Power, who is currently 119th in the latest FedEx standings, are also playing.

Daly, Clarke and McIlroy did all manage victories at other times admittedly - but it proved an elusive quest for both Bradshaw and O’Connor.

The first Irish player to win the championship was Daly at Hoylake in 1947 and the following year at Muirfield he very nearly successfully defended the title, losing out to Henry Cotton. In 1949, it was Harry Bradshaw’s turn to have a close call against Bobby Locke: The Brad tied with the South African but lost out in a 36-hole play-off. That was the year when Bradshaw was the victim of a bizarre incident in his second round when his ball landed in a broken bottle but, instead of getting relief, he played his shot and moved it only a short distance in running up a bogey.

O’Connor had no fewer than 10 top-10 finishes through his career, finishing runner-up behind Peter Thomson in the 1965 championship at Royal Birkdale.

For Clarke - who won the title at Royal St Georges in 2011 - it was a case of experiencing the sour taste of defeat first. He was runner-up to Justin Leonard at Troon in 1997.

1 Ireland to stick with winning formula against England
2 Should fans be allowed drink in the stand at sporting events?
3 Lewis Ludlam eager to make his presence felt for England
4 Man City banned for two seasons from European competition and fined €30m
5 Newman expected to survive fiery crash at finish of Daytona 500
Real news has value SUBSCRIBE