Much love for a wounded Tiger, but Molinari steals hearts 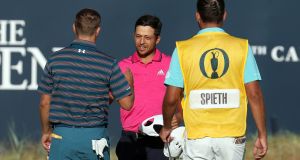 USA’s Jordan Spieth (left) and USA’s Xander Schauffele shake hands at the end of their rounds on the 18th during day four of the Open Championship 2018 at Carnoustie. Photograph: Jane Barlow/PA Wire

Could it have ever happened? Kevin Anderson winning Wimbledon. Kevin Kisner or Kevin Chappell winning the Open a week later.

Three guys called “Kev”, two of them carrying off the Claret Jug and the All England Lawn Tennis Club Single Handed Championship of the World.

Then again Xander Schauffele. Carnoustie entertained that thought for a while. And out steps a little, inconspicuous, sloe-eyed, lovable Italian called Francesco.

“Wow, this course will eat your lunch,” says Butch Harmon, Sky Sports’ folksy expert on all things swing and golf. It’s all about release, isn’t it. Butch sometimes speaks a different language.

He is a constant in an ever-changing golf landscape, forever informing us of range talk and putting strokes that can miss the cup but are excellent anyway.

Golf swings have symmetry and grace. Like Federer’s backhand, they can find the rough, go long outside the back court but always look beautiful. Harmon knows it. He is rarely not on point.

But somewhere in the last month our love for Phil Mickelson soured and yesterday we spooned big dollops of tenderness on poor Tiger, a cautionary tale of tabloid fodder, injury and bad karma.

The man who once had it all didn’t need the word “NASTY” blazed across the soles of his shoes so we could read it each time he transitioned (thanks Butch).

Tiger is, ha, ha, the wounded lion. The big beast that earned respect and 14 major titles but maybe not much love. Now it’s the other way around. He hasn’t won a major since the 2008 US Open at Torrey Pines.

He hits irons from tees, an expression of two things: common sense and vulnerability. Jordan Spieth smashes his ball to the green at the first hole, McIlroy almost gets there. Tiger wafts an iron boringly up the middle.

But in the red Sunday shirt he is looking more Tiger than pussycat. That’s quite a transition from where he has been.

Tiger has never done what Phil did or been where Phil has been, when the Californian flapped off after his ball at the US Open like a man who had left the handbrake on.

Hitting his ball when it was moving is golf’s reworking of Zidane head-butting Marco Materazzi in the 2006 World Cup final. Zidane is forgiven, Mickelson still on the naughty step.

“A shot of majestic quality. Quite exhilarating from one of the game’s greatest players,” says Ewen Murray. Always in love with the game and the players, honeyed words and starry-eyed.

At 63 years old, Murray mewing about the golf game sometimes sounds like a teenager after a shift of heavy petting in the famous locker room. Don’t bother over-thinking that image.

But fourth day at The Open is full of many things and the television cameras can barely keep up, the players spilling over each other like horses surging over Becher’s Brook at the Aintree Grand National.

You know when they don’t show Rory on TV, then Rory isn’t going well

McIlroy and his close-but-no-cigar game. Another titan, one of the second generation of divine beings, seeking his Mojo. NASTY on his shoes alright but going backwards and forwards and backwards.

“I think this guy’s is ready to play golf. I think this guy is saying I’m Rory McIlroy – I can still play golf,” says Butch, hitting one of his bum notes on the day. Or not.

Tiger isn’t leading but Tiger is the story. Tiger holds the bleachers in his hands. One behind the leaders Spieth and Schauffele.

The old Tiger would have moved and suffocated the field, not faltered. The new Tiger is vulnerable. The new Tiger, even with that personality that is distant and cold, absorbs the attention. It is on Tiger’s back swing the idiots scream, his missed putts they howl in unison.

Then at a certain point in the early evening it all goes quiet, a player seizes the moment, grips the championship. The twists magically stop. The game is run. Molinari, the first Italian British Open winner.

“Tiger had it. He had the lead,” says Butch. The beauty of Carnoustie on Sunday was they all had it.